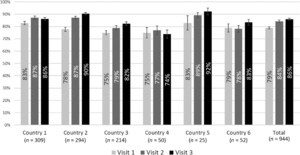 Since 2010, the WHO has recommended that clinical decision-making for malaria case management be performed based on the results of a parasitological test result. Between 2015 and 2017, the U.S. President’s Malaria Initiative–funded MalariaCare project supported the implementation of this practice in eight sub-Saharan African countries through 5,382 outreach training and supportive supervision visits to 3,563 health facilities. During these visits, trained government supervisors used a 25-point checklist to observe clinicians’ performance in outpatient departments, and then provided structured mentoring and action planning. At baseline, more than 90% of facilities demonstrated a good understanding of WHO recommendations—when tests should be ordered, using test results to develop an accurate final diagnosis, severity assessment, and providing the correct prescription. However, significant deficits were found in history taking, conducting a physical examination, and communicating with patients and their caregivers. After three visits, worker performance demonstrated steady improvement—in particular, with checking for factors associated with increased morbidity and mortality: one sign of severe malaria (72.9–85.5%), pregnancy (81.1–87.4%), and anemia (77.2–86.4%). A regression analysis predicted an overall improvement in clinical performance of 6.3% (P < 0.001) by the third visit. These findings indicate that in most health facilities, there is good baseline knowledge on the processes of quality clinical management, but further training and on-site mentoring are needed to improve the clinical interaction that focuses on second-order decision-making, such as severity of illness, management of non-malarial fever, and completing the patient–provider communication loop.