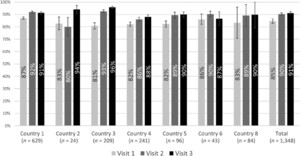 Rapid diagnostic tests (RDTs) are one of the primary tools used for parasitological confirmation of suspected cases of malaria. To ensure accurate results, health-care workers (HCWs) must conduct the RDT test correctly. Trained supervisors visited 3,603 facilities to assess RDT testing performance and conduct outreach training and supportive supervision activities in eight African countries between 2015 and 2017, using a 12-point checklist to determine if key steps were being performed. The proportion of HCWs performing each step correctly improved between 1.1 and 21.0 percentage points between the first and third visits. Health-care worker scores were averaged to calculate facility scores, which were found to be high: the average score across all facilities was 85% during the first visit and increased to 91% during the third visit. A regression analysis of these facility scores estimated that, holding key facility factors equal, facility performance improved by 5.3 percentage points from the first to the second visit (P < 0.001), but performance improved only by 0.6 percentage points (P = 0.10) between the second and third visits. Factors strongly associated with higher scores included the presence of a laboratory worker at the facility and the presence of at least one staff member with previous formal training in malaria RDTs. Findings confirm that a comprehensive quality assurance system of training and supportive supervision consistently, and often significantly, improves RDT performance.