Cover of the actual death register used by military medical officers to record deaths in F and H Forces while on the Thai–Burma railway in 1943–1945. From U.K. National Archives record WO361-2234.

Main causes of mortality in Australian and British soldiers (initial n = 7,000) in “F” Force working on the Thai–Burma railway in 1943–1944. (A) Diarrheal disease deaths (dysentery being bloody stools and diarrhea being free of gross blood) and combinations per month and (B) nutritional deficiency disease deaths (beriberi is thiamine deficiency) and combinations per month. Black bar shows malarial combinations. Note: B disease scale is one-quarter scale of A. 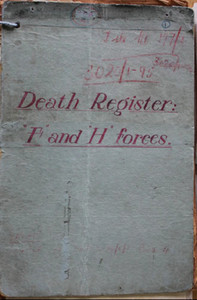 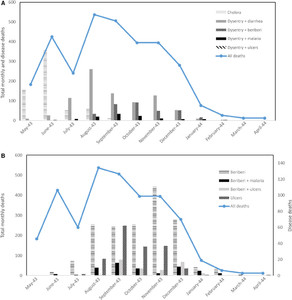 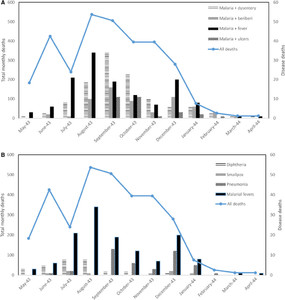 During the building of the Thai–Burma railway in 1943 Australian and British prisoners of war died at high rates from tropical infections and nutritional deficiencies. Mortality records from “F” Force (n = 7,000) showed nearly half (44%) of the soldiers perished in a single year, yet only 4% of these deaths were primarily attributed to malaria, with another 7% where malaria was listed as a major contributing cause. Case fatality rates were < 1%, with nearly all soldiers chronically infected with Plasmodium vivax > Plasmodium falciparum. Separate labor camp point prevalence malaria rates by microscopy ranged from 28% to 69% (median 54%) despite intermittent quinine suppression. During complex public health emergencies, malaria mortality may be disguised by its combination with other common infections and nutritional deficiencies.