Number of malaria cases observed at the National Center for Global Health and Medicine, by nationality and proportion, among the total cases, 2005–2016. 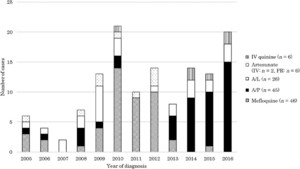 Imported Malaria at a Referral Hospital in Tokyo from 2005 to 2016: Clinical Experience and Challenges in a Non-Endemic Setting

In this study, we reviewed imported malaria cases observed at the National Center for Global Health and Medicine, Tokyo, between 2005 and 2016, to comprehend their demographic and clinical characteristics. Data on 169 cases were used to analyze demographic information; data on 146 cases were used for the analysis of clinical information. The median patients’ age was 34 years, and 79.3% of them were male. The proportion of non-Japanese patients increased and surpassed that of Japanese patients after 2015. In 82.2% of the cases, the region of acquisition was Africa, and Plasmodium falciparum was the dominant species (74.0%) followed by Plasmodium vivax (15.4%). We observed 19 (18.4%, 19/103) severe falciparum malaria cases. Mefloquine was the most commonly used drug for treatment until the early 2010s; atovaquone/proguanil was the most commonly used after its licensure in 2013. Although none of the patients died, four recrudescence episodes after artemether/lumefantrine (A/L) treatment and one relapse episode were observed. Overall, malaria was diagnosed on median day 4 of illness, and, thereon, treatment was initiated without delay. Diagnosis on day 5 or later was significantly associated with severe disease in Japanese cases (odds ratio = 4.1; 95% CI = 1.2–14.3). We observed a dominance of falciparum malaria, an increase in the number of non-Japanese cases, late treatment failure after A/L treatment, a low relapse rate, and an association between delayed malaria diagnosis and higher disease severity. Pretravel care and early diagnosis are necessary to reduce malaria-related mortality and morbidity in settings such as ours.