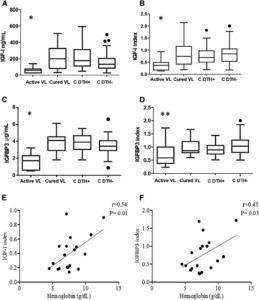 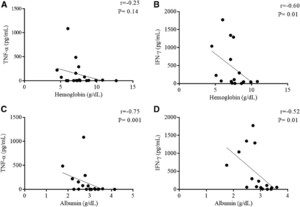 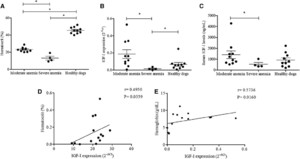 We analyzed the association between insulin-like growth factor-I (IGF-I) and the pathogenesis of anemia during active visceral leishmaniasis (VL). Serum levels of IGF-I, IGF-binding protein 3 (IGFBP3), and cytokines were measured in samples from individuals with active VL and cured VL, asymptomatic Leishmania-infected, and noninfected individuals. Then, we extended our analysis to VL dogs to evaluate hematimetric parameters, bone marrow alterations, and cytokine and IGF-I expression. We identified a positive correlation between lower IGF-I and IGFBP3 levels in active VL patients and lower hemoglobin levels. In infected dogs, there was a positive correlation between lower IGF-I expression in the bone marrow and lower peripheral blood hematocrit and hemoglobin levels. There was no correlation between decreased IGF-I level/expression and any measured cytokine serum levels in either host. The data suggest that low IGF-I expression is associated with pathogenesis of anemia in active VL, primarily in severe cases, by mechanisms other than alterations in cytokine production.