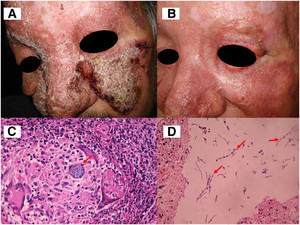 A 52-year-old man from Tijuana, Mexico, was studied for a 4-year cutaneous disease, characterized by verrucous lesions. He presented with fever and regional adenopathy (cervical, supraclavicular). Chest computed tomography scans showed normal pulmonary activity. He had a history of chronic alcoholism and uncontrolled diabetes mellitus. The presumptive diagnosis was cutaneous tuberculosis. In mycological studies, spherules were observed. Culture and subsequent PCR tests identified Coccidioides posadasii. Coccidioidin skin test was positive. Histopathology showed a suppurative granuloma. On histological examination, microabscesses with spherules in the inflammatory infiltrate and hyphae with arthroconidia in the corneal layer belonging to Coccidioides sp. were observed (Figure 1). Administration of intravenous amphotericin B and itraconazole achieved clinical and mycological cure.

The largest coccidioidomycosis-endemic area in the world is in the southwestern United States and northwestern Mexico.1 Most of the cases are pulmonary2 and can present with cutaneous dissemination in ganglionic regions; however, there are primary cutaneous cases (by inoculation) generally with a good prognosis.3 Coccidioides sp. is a highly infectious dimorphic fungus, which produces spherules with endospores in tissues and hyphae with arthroconidia in the environment or culture media.4 The presence of filamentous forms has been previously reported in diabetic patients with pulmonary and neurological diseases,5–7 but never in the skin. In this case, the presence of arthroconidia raises the possibility of contagiousness, although person-to-person transmission of coccidioidomycosis has not been previously demonstrated.