Level of preparedness of health-care facilities. 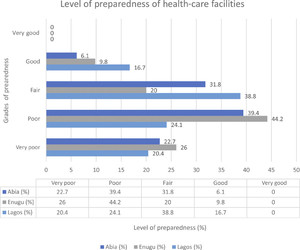 Health-Care Workers’ Perspectives on Preparedness of Health-Care Facilities for Outbreak of Communicable Diseases in Nigeria: A Qualitative Study

A high probability of another outbreak of communicable disease exists in sub-Saharan African countries, after the Ebola virus disease outbreak of 2014. Thus, health-care facility (HCF) preparedness for a prompt and effective response to disease outbreaks needs to be ascertained. In this study, Nigerian health-care workers’ (HCWs) knowledge of preparedness, perception of the level of preparedness existing in these HCFs, militating factors, and possible ways to improve, were evaluated through qualitative data collection, using focus group discussion and in-depth interview. Among the 193 HCWs which participated in the study, the perception of 190 (98.4%) was that their HCFs were insufficiently equipped to respond to disease outbreaks. None of the facilities had an emergency operation unit (EOU). Most HCWs perceived preparedness as observation of universal precautions. Other aspects of preparedness, such as training, routine emergency drills, disease surveillance, waste management, and design and location of HCFs were minimally mentioned. None of the participants had undergone any form of emergency drill training. Among the suggestions of how to improve on preparedness were immunization of staff, improved inter-departmental communication within the HCF, and routine training. The overall poor level of preparedness which exists in the HCFs means that they cannot prevent or contain a communicable disease outbreak. There is a need to improve universal precautions, communication within the HCFs, and routine interpretation of surveillance data by epidemiologists. There is also a need for the establishment of EOU in every HCF, a system that responds to, and manages emergency response to disease outbreaks, which also must be functional during non-outbreak periods.