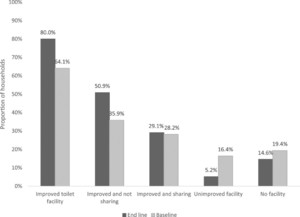 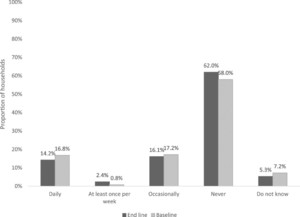 In 2012, approximately 5.6 million Zambians did not have access to improved sanitation and around 2.1 million practiced open defecation. The Zambia Sanitation and Hygiene Program (ZSHP), featuring community-led total sanitation, began in November 2011 to increase the use of improved sanitation facilities and adopt positive hygiene practices. Using a pre- and post-design approach with a population-level survey, after 3 years of implementation, we evaluated the impact of ZSHP in randomly selected households in 50 standard enumeration areas (representing 26 of 65 program districts). We interviewed caregivers of children younger than 5 years old (1,204 and 1,170 female caregivers at baseline and end line, respectively) and inspected household toilet facilities and sites for washing hands. At end line, 80% of households had access to improved sanitation facilities versus 64.1% at baseline (prevalence ratio [PR] = 1.25; 95% CI: 1.18–1.31) and 14.1% did not have a toilet facility compared with 19.4% at baseline. At end line, 10.6% of households reported living in an open defecation-free certified village compared with 0.3% at baseline (PR = 32.0; 95% CI: 11.9–86.4). In addition, at end line, 33.4% of households had a specific place for washing hands and 61.4% of caregivers reported handwashing with a washing agent after defecation or before preparing food compared with 21.1% (PR = 1.59; 95% CI: 1.39–1.82) and 55.2% (PR = 1.11; 95% CI: 1.04–1.19) at baseline, respectively. Community-led total sanitation implementation in Zambia led to improvements in access to improved sanitation facilities, reduced open defecation, and better handwashing practices. There is however a need for enhanced investment in sanitation and hygiene promotion.