Ex vivo and in vitro phenotypic characterization of blood leukocytes from patients and healthy volunteers (HVs). In ex vivo analysis, the dot plots represent the groups, while the horizontal bars the mean of each group for whole cells CD3/CD4+ (A) and CD3/CD8+ (E). T lymphocyte subsets are shown under the same conditions (B and F). Response to ML from CD4+ (C) and CD8+ (G) T cells in 6-hour culture (UNS = unstimulated). The T lymphocyte subsets obtained in response to ML are shown in the set of bars with standard error deviation (D and H). The responses obtained on stimulation with SEB were positive for all the groups, and do not appear on the figure. Mann–Whitney and Wilcoxon statistical analysis, *P < 0.05, **P < 0.01 and ***P < 0.001. ENL = erythema nodosum leprosum; LL = lepromatous leprosy; HV = heathy volunteers; TCM = central memory T cells; TEM = effector memory T cells; TEF = effector T cells.

Profile of cytokine-producing CD4+ and CD8+ T lymphocyte subsets. Cytokine histograms show the way of acquisition of frequency values for each T lymphocyte subset (as shown in the strategy of analysis from the prior figure; A–C). The upper charts disclose the results obtained among the IFN-γ– (D), TNF– (E), and IL-10–producing CD4+ T cell subsets (F). The lower charts disclose IFN-γ (G), TNF (H) and IL-10–producing CD8+ T cells (I). Data obtained by multiparametric flow cytometric analysis with responses to ML from all the groups shown on the boxes, where the horizontal line and the vertical bars represent the mean frequencies and the distribution of intervals from each group assessed respectively on 6-hour culture. SEB as control were positive for all the groups (data not shown). Mann–Whitney test were used for the statistical analysis of group comparisons, being *P < 0.05, **P < 0.01 and ***P < 0.001. UNS = unstimulated.

Assessment of the transcription factor gene expression inducing the differentiation of T lymphocytes. Assessment of TBX21/STAT4 (A), STAT6/GATA3 (B), RORC/STAT3 (C) and e FOXP3/STAT3 (D) through quantitative real-time polymerase chain reaction. The results are represented by 2−∆Ct (being ∆Ct the difference between Ct from the of interest gene and the reference gene) of experiments involving whichever group, where *P < 0.05, **P < 0.01, ***P < 0.001 and ****P < 0.0001 (Mann–Whitney test, group comparisons). In the figure, each dark circle represents a type 2 reaction patient, each grey square represents a LL patient, and each open triangle represents a healthy volunteers.

Correlation between the frequency of cytokine-producing CD4+ and CD8+ T lymphocytes and bacillary load among type 2 reaction (T2R). Correlation between the BI and the frequency of IFN-γ– (A and D), TNF– (B and E). and IL-10 (C and F)–producing CD4+ and CD8+ T cells among T2R. Each dot represents an individual, the correlation coefficients are shown in the lines (r values) and the dashed lines show the intervals with 95% confidence. Assessment through the Spearman method with significance values shown in P. 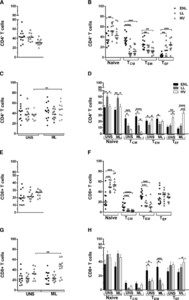 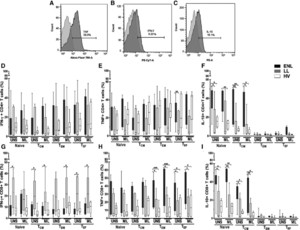 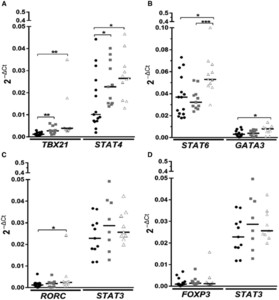 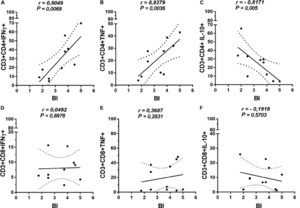 Type 2 reaction (T2R) or erythema nodosum leprosum (ENL), a sudden episode of acute inflammation predominantly affecting lepromatous leprosy patients (LL), characterized by a reduced cellular immune response. This possibly indicates a close relationship between the onset of T2R and the altered frequency, and functional activity of T lymphocytes, particularly of memory subsets. This study performed ex vivo and in vitro characterizations of T cell blood subpopulations from LL patients with or without T2R. In addition, the evaluation of activity of these subpopulations was performed by analyzing the frequency of these cells producing IFN-γ, TNF, and IL-10 by flow cytometry. Furthermore, the expression of transcription factors, for the differentiation of T cells, were analyzed by quantitative real-time polymerase chain reaction. Our results showed an increased frequency of CD8+/TNF+ effector memory T cells (TEM) among T2Rs. Moreover, there was evidence of a reduced frequency of CD4 and CD8+ IFN-γ–producing cells in T2R, and a reduced expression of STAT4 and TBX21. Finally, a significant and positive correlation between bacteriological index (BI) of T2R patients and CD4+/TNF+ and CD4+/IFN-γ+ T cells was observed. Thus, negative correlation between BI and the frequency of CD4+/IL-10+ T cells was noted. These results suggest that CD8+/TNF+ TEM are primarily responsible for the transient alteration in the immune response to Mycobacterium leprae in ENL patients. Thus, our study improves our understanding of pathogenic mechanisms and might suggest new therapeutic approaches for leprosy.