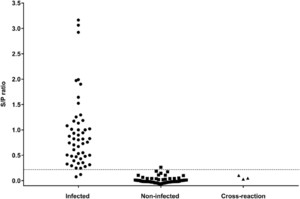 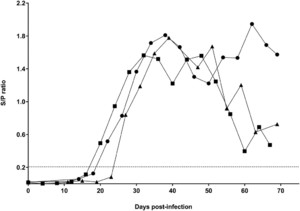 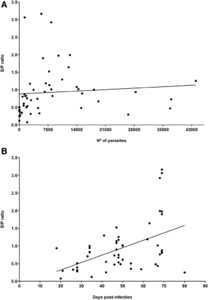 Cystic echinococcosis (CE) is a parasitic zoonosis caused by the larval stage of the tapeworm Echinococcus granulosus. Detection of the adult stage in the canine definitive host is essential for estimating infection rates, surveillance and monitoring of CE control programs. This study sought to develop and validate a coproantigen sandwich enzyme–linked immunosorbent assay (copro-ELISA), based on antibodies against E. granulosus–soluble membrane antigens (EGMA), that is capable of distinguishing infected and noninfected dogs. Anti-E. granulosus polyclonal immunoglobulin G antibodies were obtained from rabbit antiserum against EGMA. Optimization of the test was performed with 51 positive and 56 negative stool samples of canine echinococcosis. Specificity, sensitivity, cross-reactivity, intra- and inter-assay precision, and over time detection were evaluated. According to the receiver operating characteristic analysis, the diagnostic sensitivity and specificity were 96.1% (CI: 85.9–99.6) and 98.2% (CI: 89.5–100), respectively. Negative and positive predictive values were 96.5% (CI: 91.7–100) and 98% (CI: 94.1–100), respectively. No cross-reactivity with Taenia hydatigena, Dipylidium caninum, or Toxocara canis was observed. Intra- and inter-assay repeatability showed values of less than 15% of the variation coefficient. The over time detection was from 20 to 27 days postinfection with E. granulosus. The copro-ELISA based on EGMA detection offers a simplified in-house development of diagnostic testing. This assay showed high specificity and sensitivity and had no cross-reactivity with other parasites. Further studies and development of this test in a kit format may be useful for the detection of active infection in dogs living in CE endemic regions.