Multiple trophozoites of Entamoeba species exhibiting differing morphologies in a cervicovaginal smear (clockwise from the top left panel). (A) Likely Entamoeba gingivalis, exhibiting a small, dense central karyosome and fine, evenly distributed peripheral chromatin within the nucleus. Multiple pseudopodia extend in different directions and there is a marked demarcation in granularity between cytoplasmic endoplasm and pseudopodial ectoplasm. (B) Likely Entamoeba polecki with rounding in the fixative, ingested bacteria in the cytoplasm having a large and diffuse eccentric nuclear karyosome. The dense peripheral chromatin masses at both poles of the nucleus. (C–F) Trophozoites which may represent either species, exhibiting variable nuclear morphologies, vacuolization of the cytoplasm, and the ingested nuclei of leukocytes and epithelial cells in varying states of degeneration (×1,000 magnification, Papanicolaou stain). 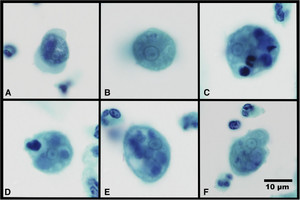 Case Report: Cervicovaginal Co-Colonization with Entamoeba gingivalis and Entamoeba polecki in Association with an Intrauterine Device

Amoebic trophozoites were identified in the cervicovaginal smear of a U.S. patient without travel history at the time of intrauterine device (IUD) removal. Subsequent morphologic analysis and DNA sequencing identified a mixed cervicovaginal colonization of the female genital tract with both Entamoeba gingivalis and Entamoeba polecki in association with Actinomyces species bacteria. This highlights to the potential for colonization of the genital tract with E. gingivalis, particularly in association with IUD placement, and represents the first report of E. polecki in this context.

Although Entamoeba infections are generally associated with intestinal conditions, the female genital tract is a rare site of Entamoeba infection. Previous cases of Entamoeba histolytica infection, characterized by severe and disfiguring lesions of necrotizing vulvovaginitis, have been noted1; in some cases, the lesions have been mistakenly identified as genital carcinoma.2 The commensal amoeba, Entamoeba gingivalis, has also been reported colonizing the female genital tract. Entamoeba gingivalis is an amoeba of the human oral cavity associated with, but not proven to cause, periodontal disease.3 A recent study found a prevalence of 23.8% carriage in those without periodontal disease, gingivitis, or caries; 34.3% in those with periodontal disease (without caries); and 40.0% in those with no history of periodontal disease, but presently undergoing orthodontic treatment.4 This species is unique among the human-infecting Entamoeba spp. in that no known cyst stage has been described.5

A 24-year-old female presented to a new patient care provider to establish care in June 2017. The patient had a copper IUD inserted 4 years earlier. The patient reported considerable cramping and irregular bleeding, beginning sometime after the IUD placement. The IUD was therefore removed at the time of presentation to the new provider. A cervicovaginal (Pap) smear was also collected at this time. Pathological analysis reported microorganisms consistent with Actinomyces species and numerous amoebae present. The pathologist suspected E. gingivalis, but could not definitively identify the amoeba from the smear. The original Pap smear, unstained slides, and cervical fluid were referred to the Centers for Disease Control and Prevention for definitive identification.

Microscopic analysis of the smear showed many neutrophils and epithelial cells interspersed with trophozoites of Entamoeba species (Figure 1). The cytoplasm of these trophozoites was often vacuolated, containing ingested bacteria and sparse-digested white cells or epithelial cell nuclei. Some trophozoites demonstrated multiple extending pseudopodia, whereas others extended only one pseudopod. Many pseudopodia had a defined demarcation between the cytoplasm, clear ectoplasm, and the more granular endoplasm. All nuclei observed took up less than one-third of the cell. The nuclear morphology was variable with most nuclei being perfectly circular or oval and containing medium-to-small-sized central karyosomes with evenly distributed peripheral chromatin. A subset of the trophozoites showed unevenly distributed chromatin and others had unevenly shaped nuclei. No cyst forms were present.

The specimen was further analyzed by PCR and sequencing of the Entamoeba 18S rRNA gene. DNA was extracted from the swab using the DNeasy Blood and Tissue kit (Qiagen, Valencia, CA), as per manufacturer specification. PCR was performed using broad specificity primers for Entamoeba species.10,11 The primers used were Entagen-F, 5′-ACT TCA GGG GGA GTA TGG TCA C-3′ and Entagen-R, 5′-CAA GAT GTC TAA GGG CAT CAC AG-3′. PCR conditions were 40 cycles, with each cycle consisting of 30 seconds at 95°C, 1 minute at 55°C, and 1 minute at 72°C, with a final extension of 7 minutes at 72°C. Controls used were DNA from E. histolytica HM-1:IMSS axenically grown trophozoites and extraction of PCR grade water. Two different volumes of DNAs (1 μL and 3 μL) were used as templates in PCR. Analysis of the products showed two major bands, which were excised from the gel and purified using the QIAquick Gel Extraction kit (Qiagen, cat #28704). The same forward and reverse primers as used in the original PCR amplification were used separately to sequence the gel-purified fragments from both ends and sequenced. A cloning step was avoided, to reduce bias in selecting a particular product if allelic variations were present. The resultant sequences were uploaded to GenBank (accession numbers MG601093 and MG601094) and were found to have 100% identity to E. gingivalis gP45 (subtype ST1, accession number KX027298, and length 450 bp) and Entamoeba polecki strain UNE9 (subtype ST4, accession number FR686400, and length 395 bp), respectively.

Following this finding, the Pap smear was reviewed by microscopy, but no cysts of E. polecki were observed. Some trophozoites exhibited morphological features consistent with either E. gingivalis or E. polecki and the species could not be differentiated. Morphometric measurements of 20 randomly chosen trophozoites throughout the Pap smear averaged 14 μm in size (range 10–20 μm) and the nuclei had an average diameter of 4 μm (range 3–5 μm). The average two-dimensional nuclear to cytoplasmic ratio of cells was measured directly from the Pap smear slide and calculated as being 0.29 (range 0.19–0.45). The 20 measured trophozoite nuclear to cytoplasmic ratios had a Gaussian distribution.

On questioning, the patient denied international travel or sexual relations with any person who had traveled internationally recently. The patient’s cramping and irregular bleeding subsided following IUD removal and she reported no further symptoms at the time of interview. No further treatment or intervention was deemed as warranted. Stool samples or oral swabs for further analysis could not be collected from the patient.

The presence of E. gingivalis in the female genital tract has generally been associated with Actinomyces colonization in patients with an IUD. Concurrent colonization with E. polecki is novel. The laboratory where the PCR was performed housed no cultures, clinical isolates, or DNA of E. polecki; thus, PCR contamination was excluded. The recovered 18S rDNA gene sequences of E. polecki and E. gingivalis differ by numerous bases and indels; thus, cross-priming and sequencing error were also excluded as possible causes of error.

Entamoeba gingivalis trophozoites range in size between 5 and 35 μm, but most usually are between 10 and 20 μm in width at the widest point. When fixed, the trophozoites retain pseudopodia and their amoeboid form (Figure 1A) and do not become rounded, as that which happens with E. histolytica. The cytoplasm may contain many ingested bacteria and often dark-staining round bodies, these being the degenerating nuclei of ingested epithelial cells, lymphocytes, and polymorphonuclear leukocytes.12 The cytoplasm often has a marked demarcation in granularity between endoplasm and the ectoplasm of the pseudopodia.4 The nucleus is spherical and has robust evenly distributed peripheral chromatin with either a central or an eccentric karyosome (Figure 1A).12 Two genetic subtypes exist, ST1 and ST2 kamaktli variant. Both subtypes are relatively common, with ST1 being more prevalent in those with periodontal disease and controls with a healthy periodontum.13 ST2 kamaktli is notably more prevalent in those undergoing orthodontic treatment, but without periodontal disease.13

Entamoeba polecki–like trophozoites range in size between 10 and 25 μm, with most between 12 and 18 μm in width.14 The trophozoite cytoplasm is often vacuolated, with hyaline borders and often containing many ingested bacteria or yeasts.12,14 The ectoplasm of the blunt pseudopodia is clear or may be finely granulated. Nuclei are often irregular shapes rather than being perfectly round.14 The peripheral chromatin is fine and may be evenly distributed or massed at one or both poles of the nucleus. The karyosome is usually very small and compact and may be either eccentric or central (Figure 1B).12,14 In some examples of this species group, the karyosome has been reported as being larger and more dispersed.12

Entamoeba polecki is rarely found in humans and typically not considered to be pathogenic.5 Four subtypes exist, the most commonly found infecting humans being ST4,13 which was the subtype recovered in this case. This organism has been found at highest prevalence in developing countries. A study performed in Papua New Guinea estimated that 30% of the population was colonized.15 Surveys in Hué, Vietnam, found 3.5% carriage of E. polecki.16 Cases of E. polecki colonizing the intestinal tract of humans in developed countries have been sporadically reported, often from people having a historical association with pigs.17,18 Stensvold et al. recently described a diagnostic PCR assay and 29 cases of human E. polecki infection over a 12-year period in Denmark, including some without recent travel history.13

In summary, we present uterine co-colonization with the oral amoeba E. gingivalis and the intestinal amoeba E. polecki. This highly unusual case was associated with the use of an IUD and expands the potential anatomical sites in which E. polecki may be recovered from humans. In this case, it is suggested that the patient’s symptoms were more likely associated with pelvic actinomycosis than with the presence of either amoeba in her genital tract.