Average daily response time (days) and reported cases per day in MCN. Note: Peak seasons of malaria transmission occur between May and August. 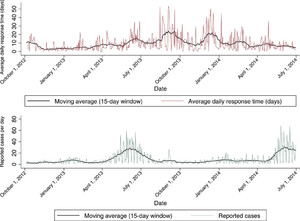 As countries transition toward malaria elimination, malaria programs rely on surveillance–response systems, which are often supported by web- and mobile phone–based reporting tools. Such surveillance–response systems are interventions for elimination, making it important to determine if they are operating optimally. A metric to measure this by is timeliness. This study used a mixed-methods approach to investigate the response time of Zanzibar’s malaria elimination surveillance–response system, Malaria Case Notification (MCN). MCN conducts both passive and reactive case detection, supported by a mobile phone–based reporting tool called Coconut Surveillance. Using data obtained from RTI International and the Zanzibar Malaria Elimination Program (ZAMEP), analysis of summary statistics was conducted to investigate the association of response time with geography, and time series techniques were used to investigate trends in response time and its association with the number of reported cases. Results indicated that response time varied by the district in Zanzibar (0.6–6.05 days) and that it was not associated with calendar time or the number of reported cases. Survey responses and focus groups with a cadre of health workers, district malaria surveillance officers, shed light on operational challenges faced during case investigation, such as incomplete health records and transportation issues, which stem from deficiencies in aspects of ZAMEP’s program management. These findings illustrate that timely response for malaria elimination depends on effective program management, despite the automation of web-based or mobile phone–based tools. For surveillance–response systems to work optimally, malaria programs should ensure that optimal management practices are in place.