Comparison of dynamic ranges between distinct blood specimens for qPCR detection for Toxoplasma gondii. Standard curves were built with Cq obtained from three replicates for each dilution of DNA isolated from clot, whole blood, and guanidine–EDTA blood. Both targets, B1 (A) and REP529 (B), were tested for each kind of sample. 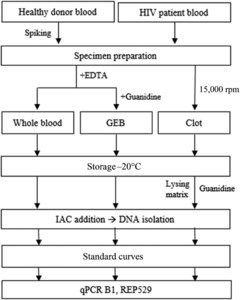 Quantitative polymerase chain reaction (qPCR) for Toxoplasma gondii multicopy genes has emerged as a promising strategy for sensitive detection of parasite DNA. qPCR can be performed from blood samples, which are minimally invasive to collect. However, there is no consensus about what type of blood specimen yields the best sensitivity. The development of a novel protocol for qPCR detection of T. gondii using blood clot, involving an appropriate DNA extraction method and the use of an internal amplification control to monitor the reaction is presented in the current study. Assays directed to the B1 and REP529 genes were performed in spiked specimens of whole blood, guanidine–ethylenediaminetetraacetic acid blood, and clot. The clot-based qPCR was shown to be more sensitive when compared with other types of specimens, detecting five and 0.05 T. gondii genomes, using B1 and REP529 targets, respectively. Finally, a comparative analysis with samples from HIV patients with clinical suspicion of toxoplasmosis was performed, demonstrating the detection of four positive suspected cases with clots compared with only one using guanidine–ethylenediaminetetraacetic acid blood. The high analytical sensitivity and the cost-effective advantages offered by clot supports this methodology as a good laboratory tool to monitor parasite burden.