Diagram of sampling scheme used in the recruitment of apparently healthy children aged 0–15 years between April 2015 and June 2016 from the Western and Nyanza provinces of Kenya. *No child was enrolled from one of the 34 selected villages in the EA far from water and low population density.

(A) Map showing the study area in Kenya. The location of the study area is marked by a rectangular box, and the details of study area are shown in the zoom out including regions named Western Province and Nyanza Province, based on the old administrative names present before the Constitutional change of 2013. Details include the provincial, district, and sublocation, which is also the census enumeration area (EA), boundaries. The selected EAs are color coded to indicate their distribution and stratification: rural or urban status and proximity to surface water (see Methods and Materials). (B) This figure shows Plasmodium falciparum prevalence (pfPR) in the study region divided into malaria-epidemiological zones (see Introduction). The lake-endemic area is divided into a lakeshore area (lighter shade of red, labeled lake-endemic) and a more inland area (darker shade of red, lake-endemic intermediate), and the highland-epidemic (lime green). (C) Age-specific patterns of geometric mean parasite density (GMPD), parasites/μL. Data for the lake-endemic area are plotted. The solid square represents the GMPD and short horizontal bars connected by a vertical line represent 95% confidence bands of the GMPD. Because of sparse data, GMPD results for the highland-epidemic area are not graphed but tabulated below the graph. The numbers shown in the graph are for children who were positive on TFM with quantified parasites. The total number of children tested by thick film microscopy (TFM) is similar to those shown in Figure 3B, except for the 6- to 8-year age group in which 18 children were tested by TFM.

Multipanel figure showing bar graphs of weighted age group Plasmodium falciparum prevalence (pfPR) in children aged 0–15 years in western Kenya in the lake-endemic (A) and highland-epidemic (B) areas and seasonal pfPR patterns in the lake-endemic (C) and highland-epidemic (D) areas. The dry season was defined as January to March and July to August; the wet season was defined as April to June and September to December. The results from the early and late dry and wet season months were combined for the highland-epidemic areas because of sparse data. The horizontal bars connected by a vertical line represent 95% confidence bands for the pfPR. 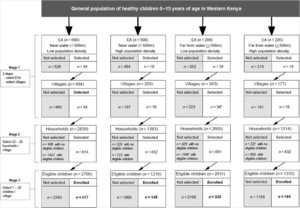 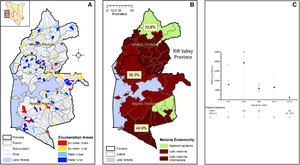 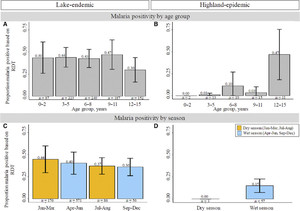 The burden of Plasmodium falciparum (Pf) malaria in Kenya is decreasing; however, it is still one of the top 10 causes of morbidity, particularly in regions of western Kenya. Between April 2015 and June 2016, we enrolled 965 apparently healthy children aged 0–15 years in former Nyanza and Western Provinces in Kenya to characterize the demographic, geographic, and household risk factors of asymptomatic malaria as part of an epidemiologic study to investigate the risk factors for endemic Burkitt lymphoma. The children were sampled using a stratified, multistage cluster sampling survey design. Malaria was assessed by rapid diagnostic test (RDT) and thick-film microscopy (TFM). Primary analyses of Pf malaria prevalence (pfPR) are based on RDT. Associations between weighted pfPR and potential risk factors were evaluated using logistic regression, accounting for the survey design. Plasmodium falciparum malaria prevalence was 36.0% (27.5%, 44.5%) by RDT and 22.3% (16.0%, 28.6%) by TFM. Plasmodium falciparum malaria prevalence was positively associated with living in the lake-endemic area (adjusted odds ratio [aOR] 3.46; 95% confidence interval [95% CI] 1.63, 7.37), paternal occupation as peasant farmer (aOR 1.87; 1.08, 3.26) or manual laborer (aOR 1.83; 1.00, 3.37), and keeping dogs (aOR 1.62; 0.98–2.69) or cows (aOR 1.52; 0.96–2.40) inside or near the household. Plasmodium falciparum malaria prevalence was inversely associated with indoor residual insecticide spraying (IRS) (aOR 0.44; 0.19, 1.01), having a household connected to electricity (aOR 0.47; 0.22, 0.98), and a household with two (aOR 0.45; 0.22, 0.93) or ≥ three rooms (aOR 0.41; 0.18, 0.93). We report high but geographically heterogeneous pfPR in children in western Kenya and significant associations with IRS and household-level socioeconomic factors.