Location of water sample collection and detection of Salmonella Typhi and Salmonella Paratyphi A DNA in water samples of urban Dhaka and rural Mirzapur, Bangladesh. 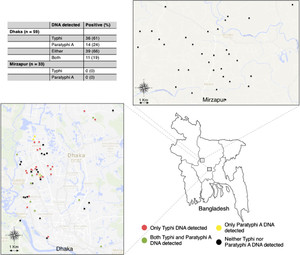 With prequalification of a typhoid conjugate vaccine by the World Health Organization, countries are deciding whether and at what geographic scale to provide the vaccine. Optimal local data to clarify typhoid risk are expensive and often unavailable. To determine whether quantitative polymerase chain reaction (qPCR) can be used as a tool to detect typhoidal Salmonella DNA in the environment and approximate the burden of enteric fever, we tested water samples from urban Dhaka, where enteric fever burden is high, and rural Mirzapur, where enteric fever burden is low and sporadic. Sixty-six percent (38/59) of the water sources of Dhaka were contaminated with typhoidal Salmonella DNA, in contrast to none of 33 samples of Mirzapur. If these results can be replicated in larger scale in Bangladesh and other enteric fever endemic areas, drinking water testing could become a low-cost approach to determine the presence of typhoidal Salmonella in the environment that can, in turn, guide informed-design of blood culture-based surveillance and thus assist policy decisions on investing to control typhoid.