Distribution of travelers tested for Zika virus (ZIKV) according to test result and symptoms. 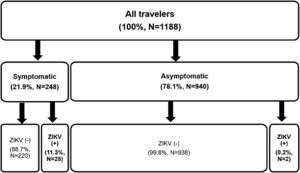 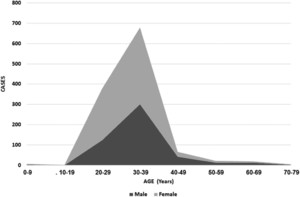 Zika Virus in Israeli Travelers: Emergence of Asia as a Major Source of Infection

Zika virus (ZIKV) had emerged as a global arboviral concern since late 2015. In this study, we describe the results of ZIKV testing in returning Israeli travelers from Zika-endemic countries. We conducted a nation-wide prospective observational study, including all ZIKV tests during January 2016–June 2017. Zika virus infection was defined as confirmed, if diagnosed by polymerase chain reaction (PCR) or serology confirmed by neutralization, and as possible if diagnosed by serology alone. During the study period, 1,188 travelers were tested: 66.7%, 30.5%, 1.6%, and 1.2% had returned from the Americas, Asia, Africa, and Oceania, respectively. Thirty persons were diagnosed with ZIKV. Most travelers tested were women of reproductive age; the gender ratio among infected travelers however was 1.0. During 2016, 19/20 (95%) ZIKV cases were acquired in the Americas; in 2017, however, 6/10 (60%) cases were acquired in Asia. Of 248 symptomatic travelers, 28 (11.3%) were diagnosed with ZIKV infection, whereas only 2/940 (0.2%) of asymptomatic travelers were diagnosed with ZIKV infection Odds ratio = 59.7 (95% confidence interval: 14.1–252.5, P < 0.0001). Our findings suggest that although women are more likely to be referred for ZIKV testing, gender does not affect the likelihood of ZIKV infection and that asymptomatic ZIKV infection appears to be rare in travelers. Furthermore, it appears that in 2017, Southeast Asia emerges as the leading source of travel-related ZIKV infection.