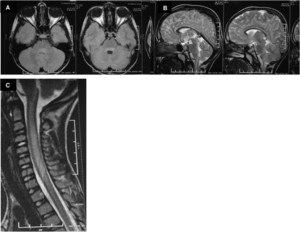 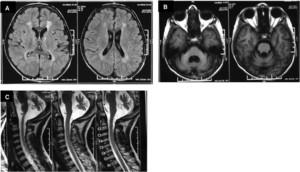 Rabies, a zoonotic viral encephalitis, continues to be a serious public health problem in India and several other countries in Asia and Africa. Survival is rarely reported in rabies, which is considered to be almost universally fatal. We report the clinical and radiological findings of eight patients with laboratory-confirmed rabies who survived the illness. With the exception of one patient who recovered with mild sequelae, all survivors had poor functional outcomes. The reported survival from rabies in recent years may reflect an increased awareness of the disease and greater access to better critical care facilities in rabies-endemic countries. Nonetheless, there is an urgent need to focus on preventive strategies to reduce the burden of this dreadful disease in rabies-endemic countries.

Rabies, an acute progressive encephalomyelitis caused by infection with viruses of the Lyssavirus genus, continues to kill about 20,000 people every year in India, accounting for almost a third of the 61,000 global human deaths due to rabies.1,2 Usually transmitted through the saliva of an infected animal, rabies encephalitis has the highest fatality rate among infectious diseases with the average interval from clinical disease onset to death reported to be 5.7 days in furious rabies and 11 days in paralytic rabies.3 Survival from rabies is rarely seen, with fewer than 20 adequately documented cases reported worldwide.4 We report the clinical and radiological findings of eight patients with laboratory-confirmed rabies who survived the illness (ranging from up to 5 months to > 1 year post onset of symptoms).

The demographic profile, details of exposure, post-exposure prophylaxis (PEP) received, clinical and radiological findings, duration of survival, and functional outcomes of the eight patients with laboratory-confirmed rabies are presented in Table 1.

All patients with laboratory-confirmed rabies, except one (26 years), were children (3–13 years) and a majority (5/8; 62.5%) of them were male. The patients were residents of five states of India—Maharashtra (4), Karnataka (1), Andhra Pradesh (1), Telangana (1), and Sikkim (1). All of them had World Health Organization (WHO) category III exposures through dog bites; five (62.5%) of them had exposures in the upper part of the body (face, chest, upper limbs, and fingers), whereas three (37.5%) were bitten on the lower limb. Wound management and anti-rabies vaccination (ARV) were initiated on the day of exposure in all patients, except in one case where ARV was initiated 12 days after the dog bite. All patients received at least three doses of ARV; one patient received few ARV doses in the gluteal region. Only 3/8 (37.5%) received rabies immunoglobulin (RIG); it was administered 12 hours after the bite (case 6), within 24 hours (case 5), and 20 days after the bite (case 8), respectively. Maximal RIG (as much as anatomically feasible) was administered locally into or around the wound sites, whereas the remaining was injected intramuscularly as per the WHO recommended protocol in all these cases.1

Incubation periods ranged from 15 to 90 days (mean 28.5 days). The clinical presentation varied and could not be distinctly classified into encephalitic or paralytic form in all patients; most of them had an atypical clinical presentation. Magnetic resonance imaging (MRI) brain was carried out in 6/8 patients (Table 1).

All patients were managed in the intensive care unit with supportive care, including correction of fluid and electrolyte imbalance, management of autonomic dysfunction, and anticonvulsants. Three patients succumbed after an average survival of 6.3 months (5, 6, and 8 months, respectively) post onset of symptoms. All three of them had severe neurological sequelae and were discharged from the hospital in a vegetative state. Five patients have survived thus far (as of June 30, 2018), with a duration of survival ranging from 6 months to 13 months post onset of symptoms. Two of these five patients have severe neurological sequelae (vegetative state); two patients are surviving with moderate neurological sequelae; and one with mild sequelae. All survivors have poor cognitive function.

Of the two patients who have survived beyond a year now, one (case 8) has achieved good functional recovery. Initially, the child was discharged after 2 weeks of hospitalization, as his family opted for palliative care at home on confirmation of a diagnosis of rabies. The child progressively deteriorated over the next 1 month with quadriparesis, swallowing difficulties, and loss of speech. The child was cared at home with nasogastric feeds and physiotherapy. At 6–7 months, he started taking oral feeds, had good neck control, and was able to walk with both hands held. He had primary gaze vertical nystagmus. On recent follow-up (13 months post onset of symptoms), he was able to speak simple sentences (cerebellar dysarthria), indicating needs, walk independently with mild ataxic gait, obey verbal commands, and able to write. He still had left upper limb weakness with areflexia and claw hand.

Details of the antemortem laboratory diagnostic tests are shown in Table 2. The laboratory tests were performed as requested by the referring physicians. For the detection of rabies viral RNA, nucleic acid extraction followed by real-time TaqMan polymerase chain reaction (PCR) as described earlier5 on cerebrospinal fluid (CSF) and saliva, and nuchal skin biopsy were performed. Cerebrospinal fluid and serum samples were tested for rabies neutralizing antibody titers by rapid fluorescent focus inhibition test, using a method described earlier.6 Viral RNA by PCR was detected in the nuchal skin of one patient (case 2). In all other cases, the laboratory confirmation was achieved by demonstrating a rise in titers of rabies neutralizing antibodies in paired CSF and/or serum samples.

Rabies is considered to be virtually 100% fatal, and without critical care, most patients reportedly die within 2–3 days of admission.7 About 14 adequately documented survivors of rabies have been reported worldwide,4 five of them from India. Most of these cases are reported after 2000, which reflects an increased awareness of the disease and greater access to better critical care facilities in rabies-endemic countries.8 Moreover, in recent years, prolonged survival of 2 weeks to 3 months has also been reported in patients who eventually succumb to the illness.9

All patients, except one (case 7), in this case series are from the pediatric age group, reiterating the vulnerability of children to animal bites and rabies in endemic countries. Significantly, all had received at least three doses of ARV initiated on the day of the bite, except one patient (case 1), where ARV was delayed. However, it is likely that they developed rabies due to omission of RIG, which is vital and considered life-saving in WHO category III exposures. Five of eight (62.5%) patients were not administered RIG. Moreover, other deviations in the WHO-recommended PEP protocol1 included the administration of ARV in gluteal region (case 4) and delay in administration of ARV (case 1; ARV initiated 12 days after bite) and RIG (case 8; RIG administered 20 days after bite). These deviations in the PEP protocol can be attributed to inadequate awareness about rabies in the community as well as among health professionals, and shortage of rabies biologicals, especially RIG, at many health-care facilities.

Two patients (cases 5 and 6) received both vaccine and RIG, and no deviation in PEP protocol was apparent based on the history. It is likely that there was a PEP failure due to multiple exposures (case 5) or bites on highly innervated areas (case 6; bite on face) leading to short incubation periods (< 3 weeks) in these two cases.

Two classical forms of rabies are generally recognized: furious (or encephalitic) and paralytic. However, the clinical presentation is often variable and may actually represent a continuum of signs and symptoms,10 as observed in our case series as well. Laboratory confirmation must, therefore, be carried out in all suspected cases wherever feasible, to aid patient management and initiate appropriate infection control measures.

Any detectable antibodies in a single CSF sample (irrespective of prior vaccination status) or serum sample (in patients with no prior vaccination) is considered diagnostic of rabies.4 In patients who have received prior rabies vaccination (partial or complete), only paired sera demonstrating a 4-fold or greater rise in antibody titers is considered positive.11 In this case series, 7/8 cases were laboratory confirmed by demonstrating a rise in titers of rabies neutralizing antibodies in paired CSF and/or serum samples. Polymerase chain reaction for viral RNA detection was negative in all cases tested, except in one (case 2) where the nuchal skin tested was positive (Table 2).

Patients who have received prior vaccination but develop rabies (usually due to lack of RIG administration and/or inadequate vaccine doses) may rapidly develop high concentrations of serum and CSF-neutralizing antibodies, possibly leading to viral clearance, which can explain the low sensitivity of PCR on various clinical samples obtained antemortem in our study. Notably, most documented survivors of rabies were diagnosed solely by the presence of neutralizing antibodies in the CSF and/or serum, but no demonstrable viral antigen or nucleic acid.4 Moreover, an inverse correlation has been reported between the presence of neutralizing antibodies and detection of viral RNA in clinical samples.5

Currently, there is no antiviral of proven efficacy in human rabies. A unique treatment, the “Milwaukee Protocol” which included induced coma and anti-excitotoxic therapy was credited with the survival of an unvaccinated teenager with bat rabies encephalitis in 2005.12 However, multiple efforts to replicate this protocol have not been largely successful. The Milwaukee Protocol, in its current version, is a supportive critical care.7

All the patients in this series were managed with supportive care in intensive care units. Sadly, all (except one case) had/continue to have moderate to severe neurological sequelae with poor functional outcomes. This is also true of most of the reported global human rabies survivors and few have made a complete recovery, requiring potentially lifelong rehabilitation and care with long-term emotional and financial repercussions for family members.4,8 Although the number of current survivors is small, an increasing number of survivors are being reported from India in recent years,4,8,9 and probabilistically, better outcomes will follow.

In conclusion, good intensive care with supportive measures may help the occasional patient with rabies encephalitis to survive, but there is an urgent need for novel antivirals and newer therapeutic strategies to improve the outcomes. This case series also highlights the tragic occurrence of the disease despite vaccination—mostly due to omission of RIG and other serious deviations in PEP protocols. The primary focus, therefore, should be on the “prevention” of rabies by increasing awareness about the disease and PEP protocols among the public and health-care professionals in rabies-endemic countries.