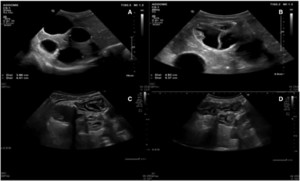 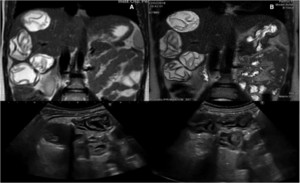 We report the case of an adolescent Moroccan girl with abdominal pain and palpable mass in the upper right side of the abdomen. In the emergency department, an abdominal ultrasound showed hepatomegaly and eight active liver cysts, compatible with cystic echinococcosis. Serology for Echinococcus granulosus confirmed the diagnosis. Other sites of localization were excluded. Treatment involved albendazole combined with puncture, aspiration, injection, re-aspiration, performed only for the most medial cysts. Periodical follow-up with abdominal ultrasound and with abdominal magnetic resonance imaging showed a progressive involution of all cysts. The treatment with albendazole was stopped after, overall, 6 months, and monthly ultrasound scan were planned as follow-up. In case of hepatic cysts, E. granulosus should be excluded, especially in children from endemic countries. A multidisciplinary approach with pediatric infectious disease specialists, radiologists, and surgeons is fundamental for disease management.