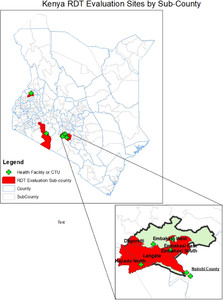 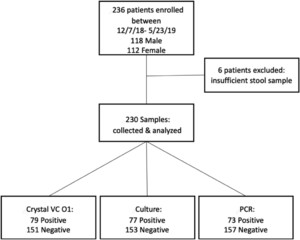 Cholera is a severe acute, highly transmissible diarrheal disease which affects many low- and middle-income countries. Outbreaks of cholera are confirmed using microbiological culture, and additional cases during the outbreak are generally identified based on clinical case definitions, rather than laboratory confirmation. Many low-resource areas where cholera occurs lack the capacity to perform culture in an expeditious manner. A simple, reliable, and low-cost rapid diagnostic test (RDT) would improve identification of cases allowing rapid response to outbreaks. Several commercial RDTs are available for cholera testing with two lines to detect either serotypes O1 and O139; however, issues with sensitivity and specificity have not been optimal with these bivalent tests. Here, we report an evaluation of a new commercially available cholera dipstick test which detects only serotype O1. In both laboratory and field studies in Kenya, we demonstrate high sensitivity (97.5%), specificity (100%), and positive predictive value (100%) of this new RDT targeting only serogroup O1. This is the first field evaluation for the new Crystal VC-O1 RDT; however, with these high-performance metrics, this RDT could significantly improve cholera outbreak detection and improve surveillance for better understanding of cholera disease burden.