This figure illustrates filarial antigenemia and microfilaremia rates by age and sex in the Balapitiya Public Health Inspector area. These results show that although some teenagers were infected, most residual infections in the study area were in adult males older than 40 years. CI = confidence interval. This figure appears in color at www.ajtmh.org.

Distribution of households (HHs) and mosquito collection sites tested for filarial infection in the Balapitiya Public Health Inspector area. Blue and green triangles indicate HHs where at least one resident had a positive filarial antigen test or microfilaremia, respectively. Households with no positive filarial antigen test are shown in open black triangles. Trap locations with one or more mosquito pools positive for filarial DNA are shown with red circles. Filarial DNA was detected in mosquitoes from 49 of 50 trap sites. Thus, filarial infection was widespread in the study area at the time of the survey. This figure appears in color at www.ajtmh.org. 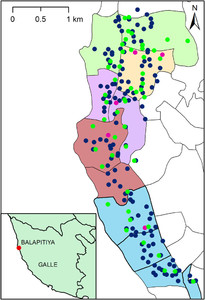 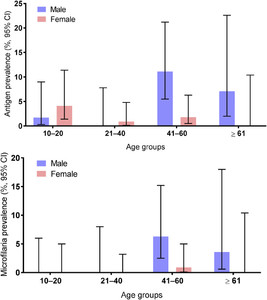 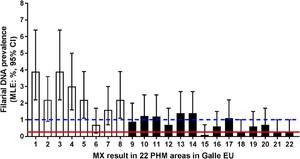 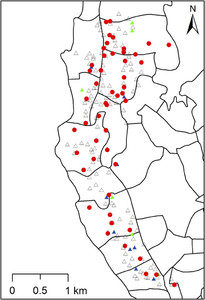 The Sri Lankan Anti-Filariasis campaign distributed five rounds of mass drug administration (MDA with diethylcarbamazine plus albendazole) to some 10 million people in eight districts between 2002 and 2006. Sri Lanka was recognized by the WHO for having eliminated lymphatic filariasis (LF) as a public health problem in 2016. However, recent studies by our group documented pockets with persistent LF in coastal Sri Lanka, especially in Galle district. The present study was performed to reexamine an area previously identified as a potential hotspot for persistent LF (Balapitiya Public Health Inspector area, population 17,500). A community survey documented high rates for circulating filarial antigenemia (3%, confidence interval [CI]: 1.8–4.9) and microfilaremia (1%, CI: 0.5–2.5%). Circulating filarial antigenemia rates were 2.8-fold higher in males than females. High prevalence was also observed for anti-filarial antibodies in young children (5.7%, CI: 3.7–8.4%) and for filarial DNA in vector mosquitoes (5.2%, CI: 4.2–6.3%). Spatial data showed that persistent LF was dispersed across the entire study area. Other studies showed that persistent LF was not limited to Balapitiya and not solved by additional rounds of MDA. Molecular xenomonitoring studies conducted in 2016 in 22 of 168 Public Health Midwife areas in the coastal Galle evaluation unit (approximate population 600,000) found that 179 of 660 (27%) pools of Culex collected from all areas were positive for Wuchereria bancrofti DNA by quantitative polymerase chain reaction; the estimated infection rate in mosquitoes was 1.26%, CI: 1.0–1.5%. Interventions other than routine MDA will be required to remove LF hotspots in Balapitiya and in other areas in coastal Sri Lanka.