Typical nonconformities found in the physical appearance of powders for suspension of artemether/lumefantrine–containing samples.

Typical nonconformities found in the labeling of samples of amoxicillin powders for suspension. 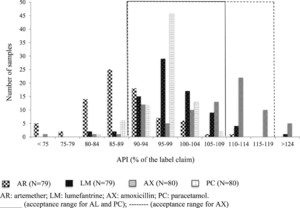 The Quality of Medicines Used in Children and Supplied by Private Pharmaceutical Wholesalers in Kinshasa, Democratic Republic of Congo: A Prospective Survey

Poor-quality medicines are a threat to public health in many low- and middle-income countries, and prospective surveys are needed to inform corrective actions. Therefore, we conducted a cross-sectional survey on a sample of products used for children and available in the private market in Kinshasa, Democratic Republic Congo: amoxicillin (AX) and artemether/lumefantrine (AL), powders for suspension, and paracetamol (PC) tablets 500 mg. Overall, 417 products were covertly purchased from 61 wholesalers. To obtain a representative sample, the products were weighted on their market shares and a subset of 239 samples was randomly extracted to undergo in-depth visual inspection locally, and they were chemically assessed at two accredited laboratories in Belgium. Samples were defined of “poor-quality” if they failed to comply with at least one specification of the International Pharmacopoeia (for AL) or United States Pharmacopoeia 37 (for AX and PC). Results are reported according to the Medicine Quality Assessment Reporting Guideline. The visual inspection detected nonconformities in the aspects of antimalarial powders for suspension, and poor-quality labels across all medicine types. According to chemical analysis, 27.2% samples were of poor quality and 59.5% of AL samples were underdosed in artemether. Poor quality was more frequent for locally manufactured antimalarials (83.3%, P = 0.021; 86.4%, P = 0.022) and PC (4.8%, P = 0.000). The poor quality of the surveyed products may decrease the treatment’s efficacy and favor the development of resistances to antimalarials. It is hoped that these findings may guide the corrective actions of the Democratic Republic of Congo Regulatory Authority, which was the main partner in the research.