Conceptual framework of the study. Oval boxes represent compartments for enteric bacteria (i.e., hands, soil, and water) and square boxes represent household survey data. Arrows signify the potential correlations of fecal contamination between different compartments and households’ characteristics. The impact of diarrhea incidents and asset index rankings on each compartment—not illustrated here—was also studied. Values for R-squared and F statistics from the regression models are displayed for each compartment. Each color denotes the potential pathways hypothesized for enteric bacterial transmission to a certain compartment. *** indicates significance at the 1% level. This figure appears in color at www.ajtmh.org.

Correlation matrix for Escherichia coli levels in soil, hands (before and after washing), and water (drinking and handwashing) for all households as well as households with and without running tap water. Spearman rank (r) and P values are shown for the correlations included in the analyses. The scale bar shows the correlation coefficient (Spearman rank). Red represents positive correlations and blue represents negative correlations. For interpretation of the references to color in this figure legend, the reader is referred to the web version of this article at www.ajtmh.org. 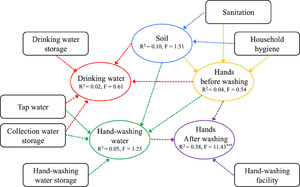 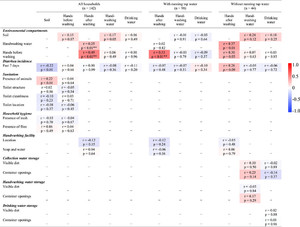 Escherichia coli pathotypes (i.e., enteropathogenic and enterotoxigenic) have been identified among the pathogens most responsible for moderate-to-severe diarrhea in low- and middle-income countries (LMICs). Pathogenic E. coli are transmitted from infected human or animal feces to new susceptible hosts via environmental reservoirs such as hands, water, and soil. Commensal E. coli, which includes nonpathogenic E. coli strains, are widely used as fecal bacteria indicator, with their presence associated with increased likelihood of enteric pathogens and/or diarrheal disease. In this study, we investigated E. coli contamination in environmental reservoirs within households (N = 142) in high-population density communities of Harare, Zimbabwe. We further assessed the interconnectedness of the environmental compartments by investigating associations between, and household-level risk factors for, E. coli contamination. From the data we collected, the source and risk factors for E. coli contamination are not readily apparent. One notable exception is the presence of running tap water on the household plot, which is associated with significantly less E. coli contamination of drinking water, handwashing water, and hands after handwashing. In addition, E. coli levels on hands after washing are significantly associated with handwashing water contamination, hand contamination before washing, and diarrhea incidence. Finally, we observed that animal ownership increases E. coli contamination in soil, and E. coli in soil are correlated with contamination on hands before washing. This study highlights the complexity of E. coli contamination in household environments within LMICs. More, larger, studies are needed to better identify sources and exposure pathways of E. coli—and enteric pathogens generally—to identify effective interventions.