Serotype distribution of 166 isolates cultured from samples collected from 2006 to 2014 in Cambodia. Serotypes included in 13-valent pneumococcal conjugate vaccine are shaded in dark. Non-typeable strains are denoted “nt.” This figure appears in color at www.ajtmh.org. 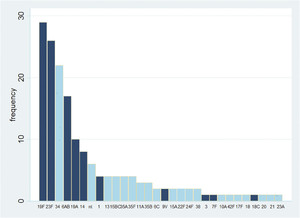 Childhood vaccination with the 13-valent pneumococcal conjugate vaccine (PCV13) was introduced in Cambodia in January 2015. Baseline data regarding circulating serotypes are scarce. All microbiology laboratories in Cambodia were contacted for identification of stored isolates of Streptococcus pneumoniae from clinical specimens taken before the introduction of PCV13. Available isolates were serotyped using a multiplex polymerase chain reaction method. Among 166 identified isolates available for serotyping from patients with pneumococcal disease, 4% were isolated from upper respiratory samples and 80% were from lower respiratory samples, and 16% were invasive isolates. PCV13 serotypes accounted for 60% (95% confidence interval [CI] 52–67) of all isolates; 56% (95% CI 48–64) of noninvasive and 77% (95% CI 57–89) of invasive isolates. Antibiotic resistance was more common among PCV13 serotypes. This study of clinical S. pneumoniae isolates supports the potential for high reduction in pneumococcal disease burden and may serve as baseline data for future monitoring of S. pneumoniae serotypes circulation after implementation of PCV13 childhood vaccination in Cambodia.