Recruitment process, Center of Excellence for Chagas Disease (CECD) patients. The process of recruitment of patients of CECD in Los Angeles for participation in the study. 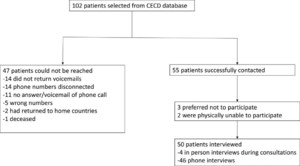 “It’s Like a Phantom Disease”: Patient Perspectives on Access to Treatment for Chagas Disease in the United States

Chagas disease (CD) affects > 6 million people globally, including > 300,000 in the United States. Although early detection and etiological treatment prevents chronic complications from CD, < 1% of U.S. cases have been diagnosed and treated. This study explores access to etiological treatment from the perspective of patients with CD. In semi-structured interviews with 50 Latin American–born patients of the Center of Excellence for Chagas Disease at the Olive View–UCLA Medical Center, we collected demographic information and asked patients about their experiences managing the disease and accessing treatment. Patients were highly marginalized, with 63.4% living below the U.S. poverty line, 60% lacking a high school education, and only 12% with private insurance coverage. The main barriers to accessing health care for CD were lack of providers, precarious insurance coverage, low provider awareness, transportation difficulties, and limited time off. Increasing access to diagnosis and treatment will not only require a dramatic increase in provider and public education, but also development of programs which are financially, linguistically, politically, and geographically accessible to patients.