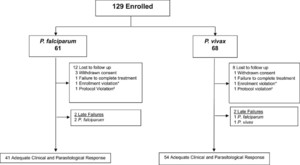 Therapeutic Response to Dihydroartemisinin–Piperaquine for P. falciparum and P. vivax Nine Years after Its Introduction in Southern Papua, Indonesia

Dihydroartemisinin–piperaquine (DHP) has been the first-line treatment of uncomplicated malaria due to both Plasmodium falciparum and Plasmodium vivax infections in Papua, Indonesia, since March 2006. The efficacy of DHP was reassessed to determine whether there had been any decline following almost a decade of its extensive use. An open-label drug efficacy study of DHP for uncomplicated P. falciparum and P. vivax malaria was carried out between March 2015 and April 2016 in Timika, Papua, Indonesia. Patients with uncomplicated malaria were administered supervised DHP tablets once daily for 3 days. Clinical and laboratory data were collected daily until parasite clearance and then weekly for 6 weeks. Molecular analysis was undertaken for all patients with recurrent parasitemia. A total of 129 study patients were enrolled in the study. At day 42, the polymerase chain reaction-adjusted efficacy was 97.7% (95% confidence intervals [CI]: 87.4–99.9) in the 61 patients with P. falciparum malaria, and 98.2% [95% CI: 90.3–100] in the 56 patients with P. vivax malaria. By day 2, 98% (56/57) of patients with P. falciparum and 96.9% (63/65) of those with P. vivax had cleared their peripheral parasitemia; none of the patients were still parasitaemic on day 3. Molecular analysis of P. falciparum parasites showed that none (0/61) had K13 mutations associated previously with artemisinin resistance or increased copy number of plasmepsin 2–3 (0/61). In the absence of artemisinin resistance, DHP has retained high efficacy for the treatment of uncomplicated malaria despite extensive drug pressure over a 9-year period.