Participation in mass drug administration supervised by a village malaria worker and health center nurse with village leaders in the background. This figure appears in color at www.ajtmh.org. 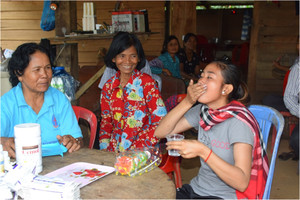 Mass drug administration (MDA) to interrupt malaria transmission requires the participation of entire communities. As part of a clinical trial in western Cambodia, four villages received MDA in 2015–2016. Before approaching study communities, a collaboration was established with the local health authorities, village leaders, and village malaria workers. Formative research guided the development of engagement strategies. In each village, a team of volunteers was formed to explain MDA to their neighbors and provide support during implementation. Public mobilization events featuring drama and music were used to introduce MDA. Villages comprised groups with different levels of understanding and interests; therefore, multiple tailored engagement strategies were required. The main challenges were explaining malaria transmission, managing perceptions of drug side effects, and reaching mobile populations. It was important that local leaders took a central role in community engagement. Coverage during each round of MDA averaged 84%, which met the target for the trial.

The spread of drug-resistant parasites poses a serious threat to malaria control in Southeast Asia.1 In response, strategies to interrupt local malaria transmission, including mass drug administration (MDA), have been proposed.2 The success of this approach, currently under pilot across the region, depends upon high uptake in target communities.3,4 For past MDAs, this has been challenging5 because of misconceptions about drug regimens, inadequate explanations of the rationale for MDA, and limited awareness of disease risk and asymptomatic malaria.6 To overcome these challenges, a range of community engagement (CE) activities are undertaken alongside MDA.7 In the global health literature, CE has various definitions, for example, promoting ethical conduct of research, or “working collaboratively” with communities “to address issues affecting the well-being of those people.”8,9 In this article, we focus on CE as a range of activities with the primary aim of promoting MDA coverage.

Battambang Province, an area of unstable malaria transmission in western Cambodia, has seen a decline in clinical Plasmodium falciparum malaria over the past decade.10 Recently, P. falciparum parasites in the area have become resistant to artemisinins and partner drugs used in artemisinin combination therapy.11–14 Village malaria workers (VMWs), present in most villages, are trained to diagnose and treat clinical malaria. Asymptomatic malaria infections go untreated and contribute to transmission, and are associated with travel to forests and a history of clinical malaria.15–19 In neighboring Pailin Province, prevalence surveys (2013–2014) revealed a reservoir of asymptomatic malaria.20

As part of a clinical trial, two villages received MDA in 2015 and two in 2016. MDA consisted of three, monthly rounds of treatment with dihydroartemisinin–piperaquine (Figure 1). Participants were followed over one year to observe clinical malaria and cross-sectional surveys were conducted quarterly to determine the prevalence of asymptomatic malaria. This article describes the process of developing and implementing a CE strategy for MDA, outcomes, challenges, and lessons learned. To this end, we sought the views of study staff from all levels: policy-makers, scientists, and field-workers. The first step entailed the field team compiling a summary of the process of CE, describing the preparatory work, listing activities, and adding the lessons learned. Local staff (who are fluent in Khmer and familiar with the local population) made key contributions to this report.

Before approaching study communities, a series of meetings with provincial and local health authorities, village leaders, and VMWs enabled the study team to understand local political and social structures. Guided by local collaborators, the team spent several months conducting prevalence surveys to identify submicroscopic malaria and communities that would be suitable for MDA.21 Formative research was conducted in 12 selected villages to guide the CE strategy. Village leaders were interviewed using a semi-structured guide. The framework approach22 was used to identify themes to prioritize for engagement activities. This entailed developing a matrix of summarized responses according to the research themes for each respondent. Respondents recommended involving all political groups, VMWs, and government/private health staff in activities. Study-specific and general malaria education was recommended in light of villagers’ limited knowledge about malaria transmission. Preferred CE activities included video shows, quizzes with prizes, art and games, and musical concerts.

In 2015, local volunteers, VMWs, and village leaders joined the study team to conduct CE activities and MDA. Before MDA, research staff meet with different groups, such as mothers, school children, forest workers, and monks (Table 1). In every village, the major mobilization activity was a public concert where health information was presented. These were very popular and well-attended. To keep people informed and address issues as they arose, meetings and other activities continued during the three rounds of MDA. After the final round, the CE team continued to make weekly village visits to provide information about malaria and receive feedback. Before MDA in 2016, the engagement strategies were reviewed and lessons learned from 2015. An excess of detail about the study had reportedly confused people and staff worked with local leaders to simplify the messages. A drama-based event replaced the concert. This enabled local people to be involved as actors and communicate the scripted health education messages. In addition, health messages were given by the local health authorities known to the villagers instead of members of the research team.

Engagement activities conducted before, during, and after mass antimalarial drug administration

All four invited villages agreed to participate in the study. Events such as meetings were well-attended and village malaria teams and volunteers were actively involved. For example, attendance for the drama performances ranged from 67% (350/522) to 86% (250/291). During each MDA round, coverage averaged 84%—exceeding the trial target.

There were several challenges when designing and implementing MDA. The rationale for MDA is difficult to convey, particularly explaining 1) asymptomatic malaria; 2) that asymptomatic infections contribute to transmission; 3) that to remove these infections people need to take drugs when they do not feel ill; and 4) that everyone in the village needs to participate for MDA to work. Within villages, education levels varied widely, and this had to be taken this into account when framing the rationale for MDA and key messages and tailoring engagement strategies (Table 2).

Before, during and after MDA, concerns from communities and staff emerged about perceived side effects of antimalarials. We gave directly observed treatment during MDA and then monitored participants actively for a week and passively for a month. Post-MDA, minor side effects such as dizziness, tiredness, and cold-like symptoms were reported in all sites. Local nurses and village volunteers visited participants to assist and reassure them as needed. Side effects were discussed directly in public meetings. Moreover, MDA was conducted as part of a clinical trial, and communities were generally unaware of medical research.

Another challenge was reaching migrants and forest workers, who are a group at higher risk of malaria infection but are more difficult to engage with as they often move in and out of the villages. Targeted meetings were held with these groups at times when they were not busy and MDA was provided when they returned from traveling if they were away during scheduled rounds of MDA. In one village, most people belonged to an ethnic minority, which meant the translation of messages into the local language. Their leader was bilingual and after being formally asked he joined the local MDA team to translate and successfully mobilized people from his community.

The experiences highlighted how understanding the concerns and attitudes of local communities and addressing them through various engagement activities are integral to the success of MDA. From our experience over two years, public events, such as concerts and drama, were important and ensured everybody received the same information at the same time. The events had to be entertaining to attract large audiences, which also built relationships and generated trust between the research team and communities.

As challenges often arose over time, a process of ongoing contact through meetings and regular visits with families was important. This highlights that multiple complementary engagement strategies were required. Participating in the MDA depended also on people’s trust, and local leaders were able to advise on the language and methods to communicate the rationale as well as taking a leading role in community mobilization.

MDA that takes place under non-trial “real-life” conditions will face additional challenges because it will need to be organized largely by communities themselves, and probably with fewer resources. At scale, effective community mobilization and local ownership will be essential if MDA is to be successful and sustainable over several years. CE will need to build upon existing local social structures: community leaders, government health staff, and village health workers, and other representatives of the local community, such as women’s leaders and forest workers. Without a large outside team to organize MDAs, local villages will need to create their own teams to mobilize their communities and educate them about malaria transmission and the rationale for MDA, including visits and follow-up of every household to ensure people participate during each round. Local capacity will need to be developed to enable villagers to lead MDAs. Well-designed education materials and support from local authorities and health workers will be needed, including training of village MDA teams to increase health literacy, support the organization of MDA, and keep accurate records. Motivated local MDA teams, with appropriate support, would be well placed to understand the concerns of their own communities and plan how to implement MDA in a locally adapted way to reach all parts of their community.

In Southeast Asia, mass antimalarial administration for malaria elimination may be targeted at villages with proven reservoirs of asymptomatic malaria rather than over wider areas, requiring the engagement of individual communities. In Cambodia, a pilot MDA achieved good coverage and this may be attributable to close collaboration with national and local authorities and a community-directed engagement strategy.