House ceiling made of aligned branches obtained from the forest.

Reported interactions between humans and rats (excerpts from qualitative survey). 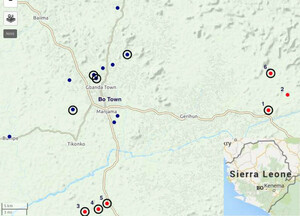 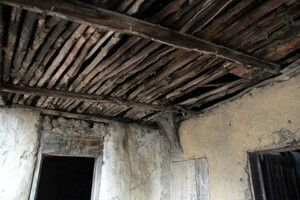 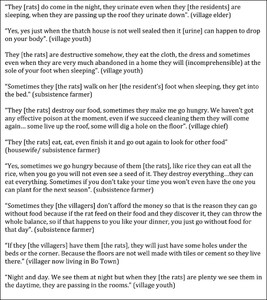 At Home with Mastomys and Rattus: Human-Rodent Interactions and Potential for Primary Transmission of Lassa Virus in Domestic Spaces

The multimammate mouse (Mastomys natalensis) is the reservoir for Lassa virus (LASV). Zoonotic transmission occurs when humans are directly or indirectly exposed to fluids of the multimammate mouse, such as urine, saliva, and blood. Housing characteristics and domestic organization affect rodent density in and around households and villages, and are likely to be a risk factor for Lassa fever in humans where the reservoir exists. We use semi-structured interviews (N &amp;amp;amp;#x003D; 51), a quantitative survey (N &amp;amp;amp;#x003D; 429), direct observations, and a rodent ecology study to provide new insights into how the organization of domestic spaces brings together humans and rodents and creates pathways for infection in rural settlements in Bo District, Sierra Leone. Rodents were frequently reported inside houses (92.4&amp;amp;amp;#x0025; of respondents), in which we predominantly trapped M. natalensis (57&amp;amp;amp;#x0025; of trapped rodents) and Rattus rattus (38&amp;amp;amp;#x0025; of trapped rodents). Building design and materials provide hiding and nesting places for rodents and lead to close proximity with humans. Patterns of contact are both unintentional and intentional and research participants reported high levels of contact with rodents (34.2&amp;amp;amp;#x0025; of respondents) and rodent fluids (52.8&amp;amp;amp;#x0025; of respondents). Rodents are also perceived as a serious threat to food security. These results present detailed knowledge about how humans live with and come into contact with rodents, including the LASV reservoir. Our results argue for further collaborative research in housing and environmental modification such as ceiling construction, food storage, and sanitation as prevention against zoonotic LASV transmission.