(A) Monocled cobra (Naja kaouthia) from southeastern Bangladesh with snake handler. (B) Naja kaouthia from Kolkata, West Bengal, India. Note the variation in the pattern of the monocular hood markings between A and B. (C) Spectacled cobra (Naja naja) from Kolkata, West Bengal, India, showing the distinctive pair of &amp;amp;#x201C;spectacles&amp;amp;#x201D;.

(A) Bilateral ptosis, typically the first sign of neurotoxicity following snakebite envenoming, was seen in 58/70 patients bitten by Naja kaouthia in southeastern Bangladesh. (B) Swelling extending above the elbow and early demarcated hyperpigmentation at the site of the bite over the proximal phalanx of the right index finger and over the dorsum of the hand. (C) Skin necrosis was seen in 19/70 patients in this series. Note advanced superficial necrosis and de-roofed blister following a bite on the dorsum of the foot.

Relationship between venom antigen concentration in the patients&amp;amp;#x0027; sera and treatment duration in hospital of 70 patients bitten by Naja kaouthia in southeastern Bangladesh. The Pearson correlation coefficient was 0.05 and the relationship was statistically significant (P &amp;amp;#x003C; 0.05). 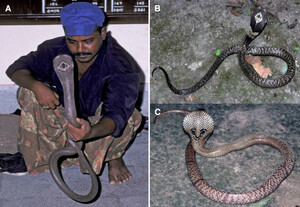 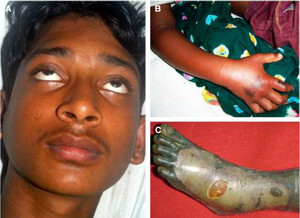 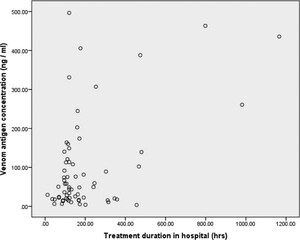 We describe 70 cases of monocled cobra (Naja kaouthia) bite admitted to Chittagong Medical College Hospital, Bangladesh. The biting snakes were identified by examining the dead snake and/or detecting N. kaouthia venom antigens in patients&amp;amp;amp;#x0027; serum. Bites were most common in the early morning and evening during the monsoon (May&amp;amp;amp;#x2013;July). Ligatures were routinely applied to the bitten limb before admission. Thirty-seven patients consulted traditional healers, most of whom made incisions around the bite site. Fifty-eight patients experienced severe neurotoxicity and most suffered swelling and pain of the bitten limb. The use of an Indian polyvalent antivenom in patients exhibiting severe neurotoxicity resulted in clinical improvement but most patients experienced moderate-to-severe adverse reactions. Antivenom did not influence local blistering and necrosis appearing in 19 patients; 12 required debridement. Edrophonium significantly improved the ability of patients to open the eyes, endurance of upward gaze, and peak expiratory flow rate suggesting that a longer-acting anticholinesterase drug (neostigmine) could be recommended for first aid. The study suggested that regionally appropriate antivenom should be raised against the venoms of the major envenoming species of Bangladesh and highlighted the need to improve the training of staff of local medical centers and to invest in the basic health infrastructure in rural communities.