Conceptual framework for the effect of aflatoxin exposure on maternal-fetal health. Maternal exposure to aflatoxin might cause adverse pregnancy outcomes through three primary pathways: induction of environmental enteric dysfunction characterized by intestinal inflammation, impaired barrier function, and systemic immune activation; upregulation of pro-inflammatory cytokines and downregulation of anti-inflammatory cytokines; and potential toxic effects on maternal and fetal organs once absorbed causing systemic immune activation, and impaired placental and fetal development. Red arrows represent the transfer of aflatoxin from mother to placenta to fetus. Solid black arrows represent the hypothesized effects of aflatoxin exposure in the mother, placenta and fetus; dotted black arrows represent the hypothesized indirect effect of aflatoxin-induced maternal inflammation on the placenta and fetus. The few cross-sectional studies conducted in humans suggest that aflatoxin exposure impairs intrauterine growth and may be a cause of pregnancy loss. Although no conclusive studies have been conducted in humans, we have reviewed evidence from in vivo and in vitro studies that aflatoxin exposure may cause anemia, intestinal damage, and elevation of pro-inflammatory cytokines. In addition, animal studies indicate aflatoxin exposure results in impaired organ development. There are no studies investigating the effects of aflatoxin on the placenta, but given that the placenta metabolizes and transports aflatoxin, further investigations into its effects are warranted. This framework provides directions for future research investigating the effects of aflatoxin exposure during pregnancy. 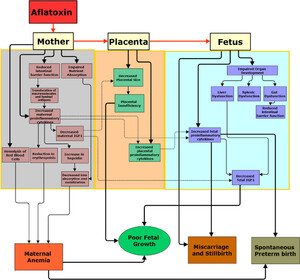 Pregnant women and their developing fetuses are vulnerable to multiple environmental insults, including exposure to aflatoxin, a mycotoxin that may contaminate as much as 25&amp;amp;amp;#x0025; of the world food supply. We reviewed and integrated findings from studies of aflatoxin exposure during pregnancy and evaluated potential links to adverse pregnancy outcomes. We identified 27 studies (10 human cross-sectional studies and 17 animal studies) assessing the relationship between aflatoxin exposure and adverse birth outcomes or anemia. Findings suggest that aflatoxin exposure during pregnancy may impair fetal growth. Only one human study investigated aflatoxin exposure and prematurity, and no studies investigated its relationship with pregnancy loss, but animal studies suggest aflatoxin exposure may increase risk for prematurity and pregnancy loss. The fetus could be affected by maternal aflatoxin exposure through direct toxicity as well as indirect toxicity, via maternal systemic inflammation, impaired placental growth, or elevation of placental cytokines. The cytotoxic and systemic effects of aflatoxin could plausibly mediate maternal anemia, intrauterine growth restriction, fetal loss, and preterm birth. Given the widespread exposure to this toxin in developing countries, longitudinal studies in pregnant women are needed to provide stronger evidence for the role of aflatoxin in adverse pregnancy outcomes, and to explore biological mechanisms. Potential pathways for intervention to reduce aflatoxin exposure are urgently needed, and this might reduce the global burden of stillbirth, preterm birth, and low birthweight.