A and B demonstrate typical damage found throughout Leogane. (A) depicts one of the main thoroughfares of Leogane pre-earthquake. (B) depicts this same thoroughfare 1 year post-earthquake. Note the infrastructural damage, loss of electric poles, and general decrease in street activity. 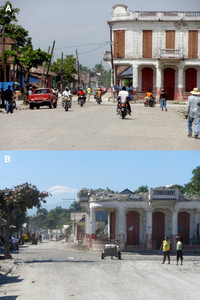 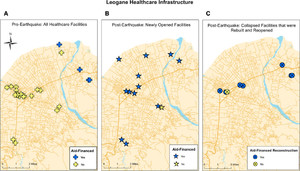 International Aid and Natural Disasters: A Pre- and Post-Earthquake Longitudinal Study of the Healthcare Infrastructure in Leogane, Haiti