Phylogenic relationship of the mosquito isolates (accession numbers KJ689452 and KJ689453) with 31 representatives of other CHIKV with three major lineages of viruses labeled: Asian, ECSA, and WA. Trees were generated by aligning the available full-length sequences using the maximum likelihood method and the Tamura–Nei model. Bootstrap values were determined using 1,000 replicates, and values are provided at each node. Gaps in the alignment were analyzed by partial deletion, which resulted in 11,244 positions in the final dataset. Accession numbers are listed for each strain. 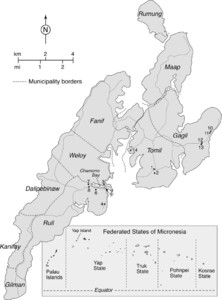 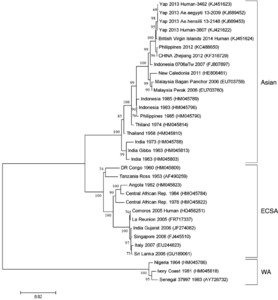 Incrimination of Aedes (Stegomyia) hensilli Farner as an Epidemic Vector of Chikungunya Virus on Yap Island, Federated States of Micronesia, 2013

Two species of Aedes (Stegomyia) were collected in response to the first chikungunya virus (CHIKV) outbreak on Yap Island: the native species Ae. hensilli Farner and the introduced species Ae. aegypti (L.). Fourteen CHIKV-positive mosquito pools were detected. Six pools were composed of female Ae. hensilli, six pools were composed of female Ae. aegypti, one pool was composed of male Ae. hensilli, and one pool contained female specimens identified as Ae. (Stg.) spp. Infection rates were not significantly different between female Ae. hensilli and Ae. aegypti. The occurrence of human cases in all areas of Yap Island and the greater number of sites that yielded virus from Ae. hensilli combined with the ubiquitous distribution of this species incriminate Ae. hensilli as the most important vector of CHIKV during the outbreak. Phylogenic analysis shows that virus strains on Yap are members of the Asia lineage and closely related to strains currently circulating in the Caribbean.