Variability of total dengue costs according to parameters included in the sensitivity analysis (2012 US millions of dollars). amb. = ambulatory; hosp. = hospital; no. = number. 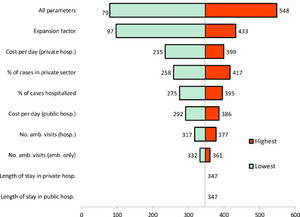 Economic Cost and Burden of Dengue in the Philippines

Dengue, the world's most important mosquito-borne viral disease, is endemic in the Philippines. During 2008–2012, the country's Department of Health reported an annual average of 117,065 dengue cases, placing the country fourth in dengue burden in southeast Asia. This study estimates the country's annual number of dengue episodes and their economic cost. Our comparison of cases between active and passive surveillance in Punta Princesa, Cebu City yielded an expansion factor of 7.2, close to the predicted value (7.0) based on the country's health system. We estimated an annual average of 842,867 clinically diagnosed dengue cases, with direct medical costs (in 2012 US dollars) of $345 million ($3.26 per capita). This is 54% higher than an earlier estimate without Philippines-specific costs. Ambulatory settings treated 35% of cases (representing 10% of direct costs), whereas inpatient hospitals served 65% of cases (representing 90% of direct costs). The economic burden of dengue in the Philippines is substantial.