Infection prevalence: 1) by age group and semivariograms; 2) of (a) Hookworm, (b) Ascaris lumbricoides, and (c) Trichuris trichiura pre- mass drug administration (MDA) (light) and post-MDA (dark). The lower sill (point at which the semivariogram plateaus, indicating maximum value where there is still spatial structure) to nugget (minimum value at which spatial structure is present) ratio indicates less spatial structure following MDA, although these data are based on only 60 schools.

Boxplots illustrating the relationship between the area of a transmission assessment survey (TAS) evaluation unit (EU), divided into quintiles, and performance of a TAS survey design that samples 308 children aged 8–10 years, in terms of the proportion of districts correctly classified in pre- (A) and post-mass drug administration (MDA) (B) contexts. Plots include the results from district-level and aggregated EUs. As performance was strongly associated with soil-transmitted helminth (STH) prevalence in pre-MDA settings, but not post-MDA settings, boxplots in (A) display the residual variation in performance by EU area, after adjusting for true prevalence.

Smoothed estimates of the proportion of times each district was correctly classified in a given true prevalence class in pre-mass drug administration (MDA) (A) and post-MDA (B) settings using a district-level transmission assessment survey (TAS) design in children aged 8–10 years. Polygons correspond to the upper and lower sensitivity estimates for Kato-Katz (blue) and mini-FLOTAC (pink) using a total sample size of 100 or 500. The grey line represents the proportion of districts correctly classified using TAS decision rules, based on the midpoint sensitivity estimate for Kato-Katz and a sample size of 308. Only categories with > 50 simulations were included to reduce random error. 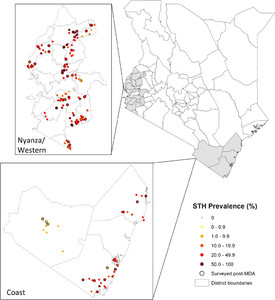 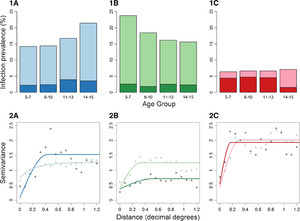 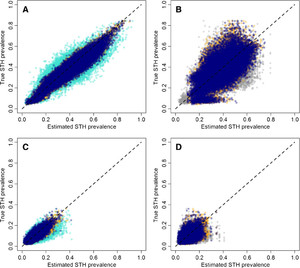 Factors Associated with the Performance and Cost-Effectiveness of Using Lymphatic Filariasis Transmission Assessment Surveys for Monitoring Soil-Transmitted Helminths: A Case Study in Kenya

Transmission assessment surveys (TAS) for lymphatic filariasis have been proposed as a platform to assess the impact of mass drug administration (MDA) on soil-transmitted helminths (STHs). This study used computer simulation and field data from pre- and post-MDA settings across Kenya to evaluate the performance and cost-effectiveness of the TAS design for STH assessment compared with alternative survey designs. Variations in the TAS design and different sample sizes and diagnostic methods were also evaluated. The district-level TAS design correctly classified more districts compared with standard STH designs in pre-MDA settings. Aggregating districts into larger evaluation units in a TAS design decreased performance, whereas age group sampled and sample size had minimal impact. The low diagnostic sensitivity of Kato-Katz and mini-FLOTAC methods was found to increase misclassification. We recommend using a district-level TAS among children 8–10 years of age to assess STH but suggest that key consideration is given to evaluation unit size.