Transmission of T. cruzi from mice to bed bugs. Box plot of the number of bed bugs that acquired T. cruzi (of 20 total insects exposed to each mouse at each time point) after feeding on infected mice. Whiskers represent minimum and maximum values.

Aggregation of T. cruzi in feces of an infected C. lectularius. 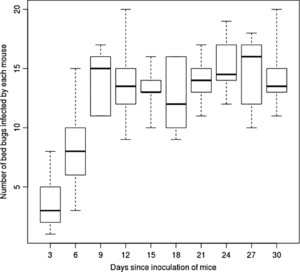 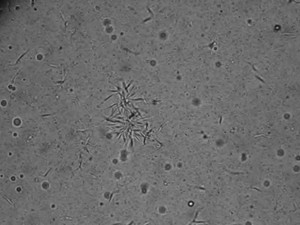 Populations of the common bed bug, Cimex lectularius, have recently undergone explosive growth. Bed bugs share many important traits with triatomine insects, but it remains unclear whether these similarities include the ability to transmit Trypanosoma cruzi, the etiologic agent of Chagas disease. Here, we show efficient and bidirectional transmission of T. cruzi between hosts and bed bugs in a laboratory environment. Most bed bugs that fed on experimentally infected mice acquired the parasite. A majority of previously uninfected mice became infected after a period of cohabitation with exposed bed bugs. T. cruzi was also transmitted to mice after the feces of infected bed bugs were applied directly to broken host skin. Quantitative bed bug defecation measures were similar to those of important triatomine vectors. Our findings suggest that the common bed bug may be a competent vector of T. cruzi and could pose a risk for vector-borne transmission of Chagas disease.