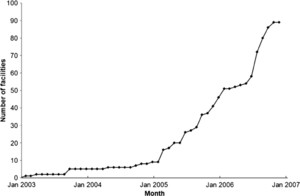 This study evaluates the efficiency of rural health centers in Rwanda in delivering the three key human immunodeficiency virus/acquired immunodeficiency syndrome services: antiretroviral treatment, prevention of mother-to-child transmission, and voluntary counseling and testing using data envelopment analysis, and assesses the impact of community-based health insurance (CBHI) and performance-based financing on improving the delivery of the three services. Results show that health centers average efficiency of 78%, and despite the observed variation, the performance increased by 15.6% from 2006 through 2007. When the services are examined separately, each 1% growth of CBHI use was associated with 3.7% more prevention of mother-to-child transmission and 2.5% more voluntary counseling and testing services. Although more health centers would have been needed to evaluate performance-based financing, we found that high use of CBHI in Rwanda was an important contributor to improving human immunodeficiency virus/acquired immunodeficiency syndrome services in rural health centers in Rwanda.