Target lesions (arrows) on the palm of the left hand.

Hematoxylin and eosin (H&E) stain showing dermatitis in the upper dermis and spongiosis at the dermal-epidermal junction (A) ×40. Vacuolization of epidermal basal cells (B) ×400, and the presence of necrotic keratinocytes (C) ×1,000. 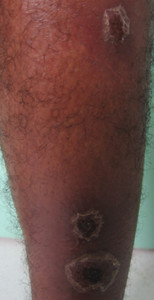 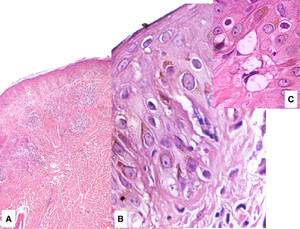 A 45-year-old otherwise healthy male from an endemic region for Leishmania braziliensis infection in Bahia, Brazil, presented with three erosive hemorrhagic infiltrated plaques on the left shin accompanied with lymphadenopathy in the groin since one month (). A Leishmania skin test performed on the left forearm was strongly positive (20 × 18 mm). Two days later, the patient felt sick and feverish. Painful erythematous target lesions developed on the palms and scapula together with conjunctivitis (). Histopathology confirmed erythema exsudativum multiforme (EEM) (). Both EEM and cutaneous leishmaniasis were successfully treated with a 5-day course of prednisone 20 mg, and a 20-day course of intravenous pentavalent antimony, respectively.