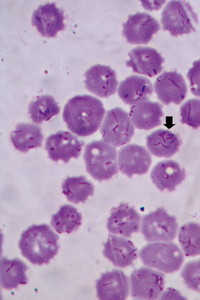 A 60-year-old male presented with a 2-week history of fever, jaundice, and altered mental status. Three months ago, he spent 30 days in the Peruvian Andes and reported insect bites. The physical examination revealed a severely ill patient with marked pallor on the skin and mucous membranes, jaundice, fever, and hypotension. The liver was felt 4 cm below the right costal margin; the patient was somnolent and disoriented but no focal or meningeal signs were found. The hemoglobin was 5.8 g/dL; total bilirubin was 13.9 mg/dL with conjugated bilirubin of 8.2 mg/dL, and the reticulocyte count was 8%. Blood films were negative for malaria, but more than 95% of them contained small pleomorphic coccobacillus (Figure 1). A 10-day course of ciprofloxacin and ceftriaxone was given with full recovery.

Acute bartonellosis caused by Bartonella bacilliformis1 or Bartonella rochalimae,2 also called Carrion’s disease, named after the Peruvian medical hero Daniel Carrion, is endemic in certain areas of the Andes regions of Peru, Ecuador, and Colombia. The disease is transmitted by sandflies of the genus Lutzomyia. Severe anemia resulting from hemolysis is the hallmark of the acute phase. Prompt initiation of antibiotic treatment reduces the high mortality rate associated with this disease.