Cell plot matrix of pre-SBA and post-SBA measurements of the self-reported understanding of selected skills using Likert scale scores. SBA = scenario-based activity. For each skill, the preactivity assessment inquired about whether the participants believed that they had a thorough understanding of the skill itself and of how the skill relates to Global Health and Public Health practice. The postactivity statement inquired participants about their perceived improvement in the understanding of the selected skill (and its relevance to Global Health and Public Health practice) as a result of having participated in the SBA. 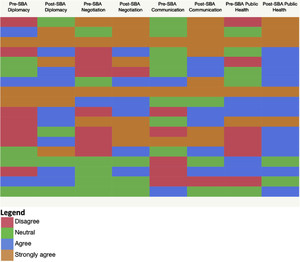