Enrollment among patients diagnosed with rifampicin-resistant tuberculosis in Rwanda. 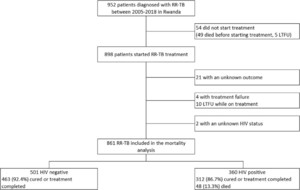 Tuberculosis (TB), including multidrug-resistant (MDR; i.e., resistant to at least rifampicin and isoniazid)/rifampicin-resistant (MDR/RR) TB, is the most important opportunistic infection among people living with HIV (PLHIV). In 2005, Rwanda launched the programmatic management of MDR/RR-TB. The shorter MDR/RR-TB treatment regimen (STR) has been implemented since 2014. We analyzed predictors of MDR/RR-TB mortality, including the effect of using the STR overall and among PLHIV. This retrospective study included data from patients diagnosed with RR-TB in Rwanda between July 2005 and December 2018. Multivariable logistic regression was used to assess predictors of mortality. Of 898 registered MDR/RR-TB patients, 861 (95.9%) were included in this analysis, of whom 360 (41.8%) were HIV coinfected. Overall, 86 (10%) patients died during MDR/RR-TB treatment. Mortality was higher among HIV-coinfected compared with HIV-negative TB patients (13.3% versus 7.6%). Among HIV-coinfected patients, patients aged ≥ 55 years (adjusted odds ratio = 5.89) and those with CD4 count ≤ 100 cells/mm3 (adjusted odds ratio = 3.77) had a higher likelihood of dying. Using either the standardized longer MDR/RR-TB treatment regimen or the STR was not correlated with mortality overall or among PLHIV. The STR was as effective as the long MDR/RR-TB regimen. In conclusion, older age and advanced HIV disease were strong predictors of MDR/RR-TB mortality. Therefore, special care for elderly and HIV-coinfected patients with ≤ 100 CD4 cells/mL might further reduce MDR/RR-TB mortality.