(A) Number of Guinea worm cases by year and (B) number of Guinea worm cases by village (B), Chad, 2010–2018. Most human cases detected during the period of interest are distributed along the Chari River, which spans from Lake Chad to the southeastern border. The dark red line distinguishes the northern Chari area and the southern Chari area. This figure appears in color at www.ajtmh.org.

(A) Ethnicities and (B) occupations of Guinea worm case-patients, Chad, 2010–2018. The Sara ethnic group was distributed along the Chari River and concentrated in the south. Expectedly, fishermen were located near rivers. This figure appears in color at www.ajtmh.org.

Numbers of Guinea worms and human cases detected by month and year, Chad, 2010–2018. Human Guinea worm cases (and worms) occurred during all months throughout 2010–2018, with most cases occurring between the end of June and the end of August. This figure appears in color at www.ajtmh.org. 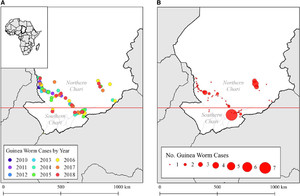 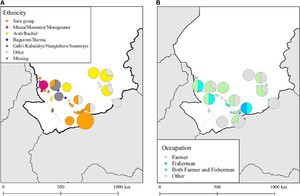 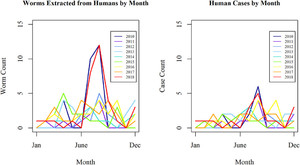 The total number of Guinea worm cases has been reduced by 99.9% since the mid-1980s when the eradication campaign began. Today, the greatest number of cases is reported from Chad. In this report, we use surveillance data collected by the Chad Guinea Worm Eradication Program to describe trends in human epidemiology. In total, 114 human cases were reported during the years 2010–2018, with highest rates of containment (i.e., water contamination prevented) in the years 2013, 2014, 2016, and 2017 (P < 0.0001). Approximately half of case-patients were female, and 65.8% of case-patients were aged 30 years or younger (mean: 26.4 years). About 34.2% of case-patients were farmers. Cases were distributed across many ethnicities, with a plurality of individuals being of the Sara Kaba ethnicity (21.3%). Most cases occurred between the end of June and the end of August and were clustered in the Chari Baguirmi (35.9%) and Moyen Chari regions (30.1%). Cases in the northern Chari River area peaked in April and in August, with no clear temporal pattern in the southern Chari River area. History of travel within Chad was reported in 7.0% of cases, and male case-patients (12.5%) were more likely than female case-patients (1.7%) to have reported a history of travel (P = 0.03). Our findings confirm that human Guinea worm is geographically disperse and rare. Although the proportion of case-patients with travel history is relatively small, this finding highlights the challenge of surveillance in mobile populations in the final stages of the global eradication campaign.