Summary of hospitalized dengue cases with comorbidities in A) Mexico, B) Brazil, and C) Colombia. Only comorbidities with frequencies ≥ 0.5% in Mexico and Colombia, or ≥ 0.2% in Brazil are shown.

Case fatality rates for hospitalized dengue patients with nonsevere dengue and severe dengue diagnoses, with and without comorbidities, in Mexico (A), Brazil (B), and Colombia (C), stratified by age group. CFR = case fatality rate (proportion of reported cases of dengue that were fatal during the study period).

Adjusted odds ratios for mortality and ICU admission in Mexico (A), Brazil (B), and Colombia (C). NC = noncalculable. Risk factors included in the multivariate logistic regression models were comorbidities identified in the univariate analysis in at least two age groups in at least two databases. Infectious diseases were excluded to prevent potential confounding effects because of the presence of differential diagnoses for dengue/other infections in this category. Dengue severity, age, and year of admission were also included in the models. 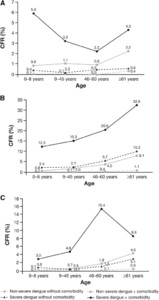 Mortality among Hospitalized Dengue Patients with Comorbidities in Mexico, Brazil, and Colombia