Flowchart of the study. 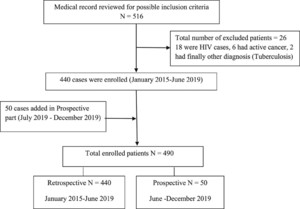 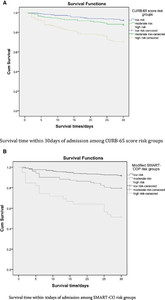 Etiology, Clinical Course, and Outcomes of Pneumonia in the Elderly: A Retrospective and Prospective Cohort Study in Thailand

Pneumonia is a leading cause of hospitalization and death among elderly adults. We performed a retrospective and prospective observational study to describe the etiology, clinical course, and outcomes of pneumonia for patients 60 years and older in Thailand. We enrolled 490 patients; 440 patients were included in the retrospective study and 50 patients were included in the prospective study. The CURB-65 score and a modified SMART-COP score (SMART-CO score) were used to assess disease severity. The median patient age was 80 years (interquartile range, 70–87 years); 51.2% were men. Klebsiella pneumoniae (20.4%) and Pseudomonas aeruginosa (15.5%) were the most common causative agents of pneumonia. A significant minority (23%) of patients were admitted to the intensive care unit (ICU), and mortality among this subset of patients was 45%. Most patients (80.8%) survived and were discharged from the hospital. The median duration of hospitalization was 8 days (interquartile range, 4–16 days). In contrast, 17.6% of patients died while undergoing care and 30-day mortality was 14%. Factors significantly associated with mortality were advanced age (P = 0.004), male sex (P = 0.005), multiple bacterial infections (P = 0.007; relative risk [RR], 1.88; 95% confidence interval [CI], 1.19–2.79), infection with multi-drug-resistant/extended-spectrum B-lactamase-producing organisms (P < 0.001; RR, 2.82; 95% CI, 1.83–4.85), ICU admission (P < 0.001; RR, 1.8; 95% CI, 1.4–2.3), and complications of pneumonia (P < 0.001; RR, 2.5; 95% CI, 1.8–3.4). Patients with higher SMART-CO and CURB-65 scores had higher rates of ICU admission and higher 30-day mortality rates (P < 0.001). These results emphasize the importance of Gram-negative bacteria, particularly K. pneumoniae and P. aeruginosa, as major causes of pneumonia among the elderly in contrast to other reports, Streptococcus pneumoniae is a common cause of pneumonia among elderly individuals worldwide. The SMART-COP and CURB-65 scores were developed to assess pneumonia severity and predict mortality of young adults with pneumonia. Few studies have examined the appropriateness of these scores for elderly patients with multiple comorbidities. A limited number of studies have used modified versions of these scores among elderly individuals. We found that Gram-negative bacteria has a major role in the etiology of pneumonia among elderly individuals in Southeast Asia. A significant proportion of elderly individuals with low CURB-65 scores were admitted to the hospital, indicating that hospital admission may reflect fragility among elderly individuals with low CURB-65 scores. The modified SMART-COP score (SMART-CO score) sufficiently predicted intensive care unit admission and the need for intensive vasopressor or respiratory support. A SMART-CO score ≥ 7 accurately predicted 30-day mortality.