Map of countries included in the study. 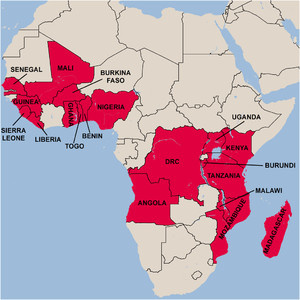 Estimating the Fraction of Severe Malaria among Malaria-Positive Children: Analysis of Household Surveys in 19 Malaria-Endemic Countries in Africa

To date, the only robust estimates of severe malaria cases include children who present to the formal healthcare system. It is a challenge to use these data because of varying age ranges of reporting, different diagnosis techniques, surveillance methods, and healthcare utilization. This analysis examined data from 37 Demographic and Health Surveys and Malaria Indicator Surveys across 19 countries in sub-Saharan Africa collected between 2011 and 2018. The outcome of interest is a proxy indicator for severe malaria, defined as a proportion of children aged 6–59 months with at least one self-reported symptom of severe illness including loss of consciousness, rapid breathing, seizures, or severe anemia (hemoglobin < 5 g/dL) among those who were positive for malaria. The study includes a weighted descriptive, country-level analysis and a multilevel mixed-effects logistic regression model to assess the determinants of severe malaria. Among children positive for malaria across all surveys, 4.5% (95% CI: 4.1–4.8) had at least one sign or symptom of severe malaria, which was significantly associated with age, residence, wealth, and year of survey fieldwork at a P-value less than 0.05. This analysis presents a novel and an alternative approach of estimating the fraction of severe malaria cases among malaria-positive children younger than 5 years in malaria-endemic countries. Estimating severe malaria cases through population-based surveys allows countries to estimate severe malaria across time and to compare with other countries. Having a population-level estimate of severe malaria cases helps further our understanding of the burden and epidemiology of severe malaria.