All participating governing bodies will oversee the release and monitoring of genetically modified populations. Efforts must invite the public into the governing process, through education and surveys of affected constituencies. Stakeholders must be mindful to avoid disproportionate focus on output legitimacy and performance: the genetic modified product itself and the actions of scientific and technological innovation, implementation, and monitoring separate from input and surveys of affected constituencies. Input legitimacy, defined as “collectively binding decisions (which) originate from the authentic expression of the preferences of the constituency in question,” is an absolute necessity.27 NGOs = nongovernmental organizations; OECD = the Organization for Economic Cooperation and Development; UNDP = UN Development Programme. 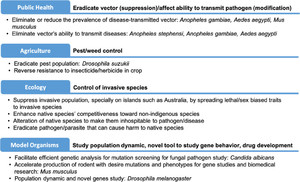 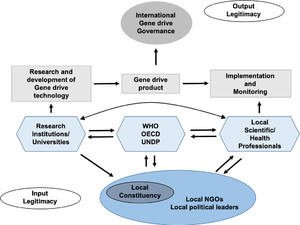 Gene drive technologies represent powerful tools to develop vector control strategies that will complement the current approaches to mitigate arthropod-borne infectious diseases. The characteristics of gene drive technologies have raised additional concerns to those for standard genetically engineered organisms. This generates a need for adaptive governance that has not been met yet because of the rapid rate of progress in gene drive research. For the eventual release of gene drive insects into wild populations, an international governance network would be helpful in guiding scientists, stakeholders, public opinion, and affected communities in its use. We examined the current institutions and governing bodies among various continents that could have an impact on gene drive governance or the potential to adapt to its future use. Possible governance strategies also are proposed that seek to bridge gaps and promote an ethically sound policy framework. Ideally, governance strategies should be developed before or at the same pace as gene drive research to anticipate field releases and maximize their impact as a public health tool. However, this is not likely to happen as it takes years to develop global accords, and some countries may choose to move ahead independently on the new technology.