Cause-specific mortality rates by intention-to-treat for the leading causes of child mortality over the four follow-up periods of the study.

Cause-specific mortality rates by intention-to-treat for the leading causes of child mortality over the four follow-up periods of the study. 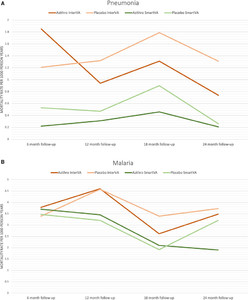 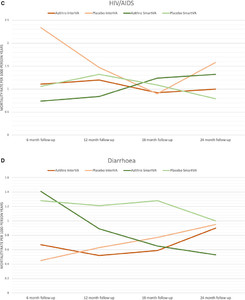 Effect of Mass Treatment with Azithromycin on Causes of Death in Children in Malawi: Secondary Analysis from the MORDOR Trial

Recent evidence indicates mass drug administration with azithromycin may reduce child mortality. This study uses verbal autopsy (VA) to investigate the causes of individual deaths during the Macrolides Oraux pour Réduire les Décès avec un Oeil sur la Résistance (MORDOR) trial in Malawi. Cluster randomization was performed as part of MORDOR. Biannual household visits were conducted to distribute azithromycin or placebo to children aged 1–59 months and update the census to identify deaths for VA. MORDOR was not powered to investigate mortality effects at individual sites, but the available evidence is presented here for hypothesis generation regarding the mechanism through which azithromycin may reduce child mortality. Automated VA analysis was performed to infer the likely cause of death using two major analysis programs, InterVA and SmartVA. A total of 334 communities were randomized to azithromycin or placebo, with more than 130,000 person-years of follow-up. During the study, there were 1,184 deaths, of which 1,131 were followed up with VA. Mortality was 9% lower in azithromycin-treated communities than in placebo communities (rate ratio 0.91 [95% CI: 0.79–1.05]; P = 0.20). The intention-to-treat analysis by cause using InterVA suggested fewer HIV/AIDS deaths in azithromycin-treated communities (rate ratio 0.70 [95% CI: 0.50–0.97]; P = 0.03) and fewer pneumonia deaths (rate ratio 0.82 [95% CI: 0.60–1.12]; P = 0.22). The use of the SmartVA algorithm suggested fewer diarrhea deaths (rate ratio 0.71 [95% CI: 0.51–1.00]; P = 0.05) and fewer pneumonia deaths (rate ratio 0.58 [95% CI: 0.33–1.00]; P = 0.05). Although this study is not able to provide strong evidence, the data suggest that the mortality reduction during MORDOR in Malawi may have been due to effects on pneumonia and diarrhea or HIV/AIDS mortality.