K18-hACE2 C57Bl/6J mice were intranasally inoculated with 8 × 104 TCID50 of SARS-CoV-2, and weight loss and clinical score were monitored. (A) Weight loss is measured as the percent weight loss compared with the initial weight on day 0. (B) Clinical score consists of weight loss, activity level, eye closure, appearance of fur and posture, and respiration. The mock-infected mice did not exhibit any clinical symptoms or experience any weight loss throughout the experiment. 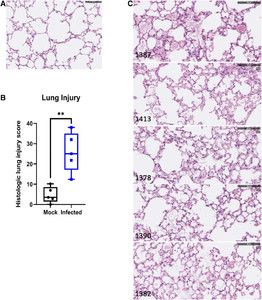 Murine models of SARS-CoV-2 infection are critical for elucidating the biological pathways underlying COVID-19. Because human angiotensin-converting enzyme 2 (ACE2) is the receptor for SARS-CoV-2, mice expressing the human ACE2 gene have shown promise as a potential model for COVID-19. Five mice from the transgenic mouse strain K18-hACE2 were intranasally inoculated with SARS-CoV-2 Hong Kong/VM20001061/2020. Mice were followed twice daily for 5 days and scored for weight loss and clinical symptoms. Infected mice did not exhibit any signs of infection until day 4, when no other obvious clinical symptoms other than weight loss were observed. By day 5, all infected mice had lost around 10% of their original body weight but exhibited variable clinical symptoms. All infected mice showed high viral titers in the lungs as well as altered lung histology associated with proteinaceous debris in the alveolar space, interstitial inflammatory cell infiltration, and alveolar septal thickening. Overall, these results show that the K18-hACE2 transgenic background can be used to establish symptomatic SARS-CoV-2 infection and can be a useful mouse model for COVID-19.