Phylogenetic tree showing the core genome-based phylogeny between studied Vibrio cholerae strains. Based on the literature, we selected 63 strains belonging to pandemic groups 3 and 4, and their genomes were downloaded from GenBank. The 65 genomes of Vibrio sp. strains were annotated with Prokka, and these annotations were used by Roary with an identity of 80% to identify the pangenome of strains, including 389 core genes, as previously described.12 The evolutionary history of studied strains was inferred using the maximum likelihood method, Kimura 2-parameter model within MEGA 715, and iTOL (https://itol.embl.de/). 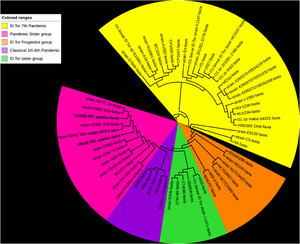 The origin of a cholera outbreak may be unclear, as recently in Algeria. In two patients from North Africa, Vibrio cholerae was isolated in the context of hepatobiliary tract infections without any known outbreak. Gallbladder and asymptomatic long-term carriers might play a role in the emergence of cholera.