Load of Escherichia coli in drinking water by the type of water source. *Mann-Whitney U test, P-value = 0.233. 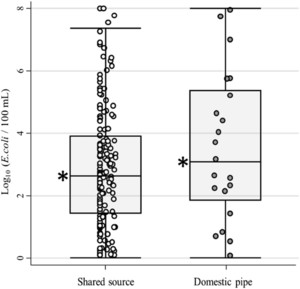 Drinking water contamination is a frequent problem in developing countries and could be associated with bacterial pathogen carriage in feces. We evaluated the association between the risk of drinking water and bacterial carrier status in children younger than 5 years in a cross-sectional study conducted in 199 households from three Peruvian rural communities. Fecal samples from children were screened for pathogenic Aeromonas, Campylobacter, and Vibrio species, as well as for Enterobacteriaceae, including pathogenic Escherichia coli. The drinking water risk was determined using E. coli as an indicator of contamination. Nineteen (9.5%) children were colonized with pathogens and classified as carriers, all without diarrhea symptoms. Of 199 drinking water samples, 38 (19.1%) were classified as very high risk because of high fecal contamination (> 100 E. coli/100 mL). Shared-use water sources, daily washing of containers, and washing using only water were associated with higher prevalence of bacterial carriage, whereas there was no association between households reporting boiling and chlorination of water and carrier status. The prevalence of carriage in children exposed to very high-risk water was 2.82 (95% CI: 1.21–6.59) times the prevalence of those who consumed less contaminated water, adjusted by the water source and daily washing. Our results suggest that household drinking water plays an important role in the generation of carriers with diarrheal pathogens. Our findings also highlight the importance of interventions to ensure the safety of drinking water. Further studies are needed to validate the observed association and determine its significance with respect to diarrhea in the community.