Age and gender distribution of hand, foot, and mouth disease cases in Xi’an city, northwestern China, 2009–2018. This figure appears in color at www.ajtmh.org. 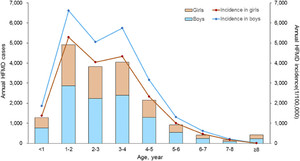 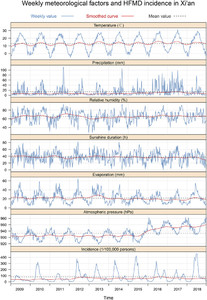 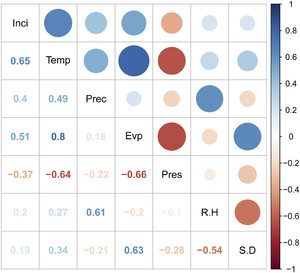 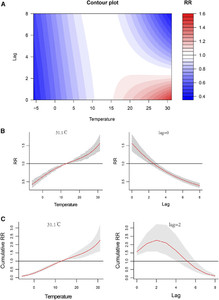 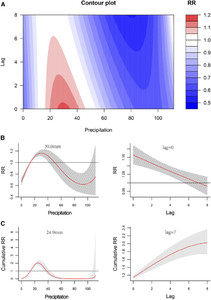 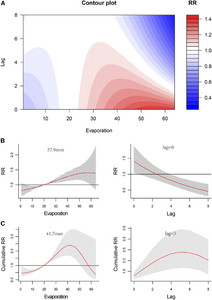 Hand, foot, and mouth disease (HFMD) is a common infectious disease in the Asia-Pacific region that primarily affects children younger than 5 years. Previous studies have confirmed that the seasonal transmission of this disease is strongly related to meteorological factors, but the results are not consistent. In addition, the associations between weather conditions and HFMD in northwestern China have not been investigated. Therefore, we aimed to examine this issue in Xi’an, the largest city of northwestern China that has been suffering from serious HFMD epidemics. In the current study, data for HFMD and six meteorological factors were collected from 2009 to 2018. Using cross-correlation analysis, the Granger causality test, and the distributed lag nonlinear model, we estimated the quantitative relationships and exposure-lag–response effects between weekly meteorological factors and HFMD incidence among children. We found that the seasonal distribution of HFMD in Xi’an has two peaks each year and is significantly impacted by the weekly temperature, precipitation, and evaporation over an 8-week period. Higher values of temperature and evaporation had positive associations with disease transmission, whereas the association between precipitation and HFMD showed an inverted-U shape. The maximum relative risks (RRs) of HFMD for the weekly mean temperature (approximately 31.1°C), weekly cumulative evaporation (57.9 mm), and weekly cumulative precipitation (30.0 mm) were 1.56 (95% CI: 1.35–1.81), 1.40 (95% CI: 1.05–1.88), and 1.16 (95% CI: 1.11–1.70), respectively. The identified risk determinants and lag effects could provide important information for early interventions to reduce the local disease burden.