Area under receiver operating characteristic curve of Kit Chagastest–ELISA recombinant v.4.0 using saliva samples instead of serum for the detection of antibodies against Trypanosoma cruzi. 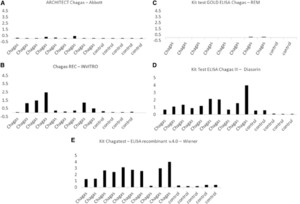 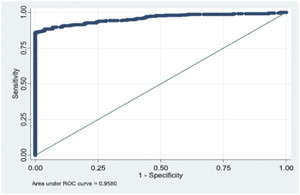 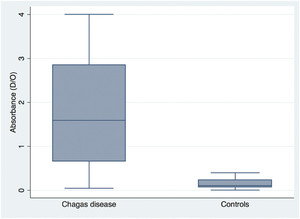 Chagas is a neglected disease endemic in Latin America. Vector transmission control had been aggressively performed. Recent entomological surveillance in Brazil has revealed natural infection rates ranging from 0.40% to 0.52%. Although serological surveys are complex to develop, they are important for disease control. In this study, we validated the use of saliva in ELISA commercial kits with a cohort of 100 patients with Chagas disease followed at Hospital das Clinicas in São Paulo, Brazil, and 50 healthy controls. Five ELISA kits for detecting antibodies against Trypanosoma cruzi were tested. The best discrimination between Chagas patients and controls was observed with the Wiener kit, which yielded a sensitivity of 97% and a specificity of 100%. Our findings reveal that the use of saliva may be an alternative to large-scale screening surveys in detecting T. cruzi antibodies; it is a noninvasive sample collection method potentially key to large-scale screening in children.

Chagas disease (ChD) is caused by the protozoan Trypanosoma cruzi and is naturally transmitted by insects from Reduviidae family. The disease may also be acquired congenitally, by organ transplantations or blood transfusions.1,2 Chagas disease is endemic in Latin America, and 70 million people are at risk of becoming infected. Because of effective domestic vector control and screening of blood donors for T. cruzi being carried out in most Latin American countries, most of the current cases are in indeterminate and chronic forms of the disease.3 There are 5.7 million infected people in Latin America,4 with 70,000 ChD-related deaths annually in the region and 528,000 disability-adjusted life years.5 In Brazil, it is estimated that there are 2–3 million infected individuals.6

Because of globalization and increasing international travel, ChD cases have also been reported in Europe and Asia.7 Around 99% of the millions of infected people have poor or no access to medical care and remain undiagnosed and untreated.8

Despite the main vector, Triatoma infestans have been totally controlled, other peridomestic vectors may transmit the parasite in Brazil. Residual infestation and recolonization of households occur in endemic areas, threatening the long-term success of vector control.9 Nevertheless, in our recent study, 46% of participants related the presence of “kissing bug” in their homes (unpublished data, E. C. Sabino). Chronic limitations in personnel and resources of the health sector in Brazilian rural areas, associated with new public health threats such as dengue, Zika, and chikungunya, pose serious obstacles to maintaining the Chagas vector-control programs.

Surveillance of large territorial areas is not simple. Therefore, in this study, we evaluated a simple, noninvasive, saliva-screening tool as an alternative for serological surveys in endemic regions.

One hundred T. cruzi–infected patients, followed at Hospital das Clinicas de São Paulo, Brazil, and 50 healthy controls were enrolled in the study. We collected whole saliva samples in plastic tubes (Salivette, Sarstedt, Nümbrecht, Germany) according to the manufacturer’s instructions and stored at −20°C until use.

All the tests were performed according to the manufacturer’s instructions. The equipment did not allow for any modifications.

These tests were performed according to the manufacturer’s instructions with the following modifications: 220 µL and 300 µL whole saliva and 200 µL of peroxidase-conjugated anti-human IgG (kit).

These tests were performed according to the manufacturer’s instructions with the following modifications: 200 µL of whole saliva and 100 µL of pure peroxidase-conjugated anti-human IgG without dilution and incubated for 60 minutes.

Initial tests were performed with samples from 10 seropositive T. cruzi patients and five healthy controls using the five commercial ELISA kits. These results are presented in Figure 1. The best discrimination between positive and negative saliva antibodies against T. cruzi was observed with the ELISA–Kit Chagatest–ELISA recombinant v.4.0–Wiener. Therefore, we selected this kit for testing all of the samples.

The cutoff of 0.391 for saliva with Chagatest was established as two SDs above the mean absorbance of saliva from 50 healthy controls. The sensitivity of this test was 97% and the specificity 100%. We also analyzed using the receiver operating characteristic curve (Figure 2); the obtained cutoff (0.389) was similar to the previous one, and the sensitivity and specificity were 98% and 100%, respectively. There was a good discrimination between negative and positive samples (Figure 3).

In a subsample of five Chagas cases, we also analyzed the preservation of antibodies in the saliva samples stored at room temperature for 5 days compared with those processed immediately after collection. No differences were observed between sample-processing methods.

In this study, we evaluated an alternative method for large-scale T. cruzi antibody screening, especially among children, using saliva samples instead of blood samples to detect antibodies to T. cruzi in commercial ELISA kits.

Saliva specimens provide interesting advances for diagnosis because their collection is noninvasive and, therefore, well accepted by patients. In addition, collecting these samples does not necessitate medically trained staff, and the samples are easy to process. Studies have demonstrated that saliva samples are interesting alternatives to venous blood specimens for different diseases, including infectious diseases, such as dengue and Hepatitis E virus (HEV), particularly in situations when blood collection is difficult.10,11

Saliva samples also appear to be highly reliable for the diagnosis of visceral leishmaniasis; they yield fewer false-positive results than serum samples. Other studies have highlighted the usefulness of noninvasive samples such as urine and saliva as diagnostic tools for patients with kala azar, particularly in endemic regions.12

In addition, studies have suggested that salivary antibody responses can be used to detect incident infections with norwalk virus in prospective surveys.13 Also for ChD, an in-house method was developed, but the sensitivity was small for epidemiological surveys.14 Recently, a study similar to ours analyzing two commercial kits shows that it is a good alternative for Chagas screening, but the number of samples included in that study was a quite low.15

The assay developed in our laboratory using saliva has the potential to be beneficial outside a hospital environment in remote, resource-limited locations.

A possible limitation to this kind of study could be how well saliva samples are preserved after collection. In this pilot study with a small number of samples, we observed that the saliva is preserved for up to 5 days at room temperature. There is also a concern about the validation of the sensitivity for this test that must be replicated with a larger number of positive samples. Moreover, the fact that the sensitivity of saliva specimen tests is high (98%) but not 100% compared with blood specimen tests indicates the need to correct this problem in epidemiological survey analyses.

Oral fluid and urine rapid diagnostic tests offer an attractive apparent alternative option to blood for diagnosis. A series of diagnostic tools has been developed by a commercial company, but such tools require further improvement, particularly in a context in which bodily fluids are already known to perform more poorly than blood specimens.16

The ability to use noninvasive techniques to assess patients rapidly at the point of care is a major goal of modern medicine. Therefore, saliva is an attractive bio-fluid to assess health, disease, and development. Saliva is preferred over other types of biological samples because of its convenience and ease of collection, and it may be collected repeatedly, even in the most vulnerable patients, without risk of harm. Recent technological advancements have improved our ability to detect thousands of proteins and/or microbes from a single salivary sample, making noninvasive assessment in neonates possible.17

Saliva presents a large number of analytes that may be affected by diverse physiological and pathological conditions. Furthermore, the noninvasive, simple, and cost-effective collection methods prompt interest in evaluating the diagnostic and prognostic utility of saliva. However, saliva should be carefully evaluated in relation to pre-analytical and analytical variables such as collection and storage methods, analyte circadian variation, sample recovery, prevention of sample contamination, and analytical procedures.

Because of its antioxidant status, saliva has also been used to measure oxidative stress in individuals with type 2 diabetes.18 Furthermore, several studies have demonstrated correlations of salivary markers of stress and insulin resistance including cortisol, insulin, adiponectin, and resistin with serum concentrations. These findings suggest the potential diagnostic value of saliva in health screening and risk stratification studies, particularly in pediatric populations, with implications for inflammatory, metabolic, and cardiovascular conditions.18

Therefore, using saliva as a fluid for diagnostic purposes in ChD would be a huge breakthrough for both patients and healthcare providers because saliva collection is easy, noninvasive, and inexpensive. Different diagnostic applications of saliva shed light on emerging technologies and tools for disease screening, detection, and monitoring. Moreover, the use of a noninvasive sample collection method will be key for applying large-scale screening in children.